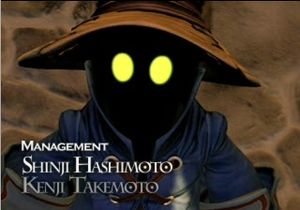 Your new character, unnamed at the moment

After some more movies, you begin in a new area – Alexandria – as a new character, whose name is unknown at this time. As you explore the town there are a lot of items to be found, so be sure to look everywhere. You will also be introduced to a number of mini-games and bonuses in this area. Some of these games are only available here, while others will continue throughout the game in many different areas.

Finding the items in Alexandria[edit]

In Vivi's starting area, there are two Potions on the left side of the street, and a potion, a Fang card, and 9g (Gil, the Final Fantasy unit of currency) in a house on the right of the street. Head to the next area at bottom of the screen. In this area there are three cards (Zombie, Lizard Man, and Sahagin) around the outside of the circle, and a potion by the statue. Head back up to the north to the tavern area to get 33g and a Goblin card in the grass at the bottom of the screen.

In this area, you can find a Phoenix Pinion, near the entrance to the Inn. Out front of the inn there will also be three girls jump roping. You can get some great prizes from them for winning, but it is extremely challenging to complete. The best way to get some good prizes is try and keep a beat going between Vivi's feet and pressing the

button. The rope will get faster and faster at each prize level, but at 200 it becomes a weird pattern, so turn the volume up and listen to Vivi's feet to figure it out. At 300 the timing will go back to normal but very fast. You also have another chance at this game later on when you come back to Alexandra. The currently-closed Weapon and Synth shops are to the east. In the weapon shop you can find a Remedy and in the synthesis shop an Ether.

Making your way to the show[edit]

When you are satisfied with your exploration and scavenging, make your way to the ticket booth. The booth is in the center of Alexandria's main square (about as far north of your starting position as you can go). The Synthesist and Weapon Smiths are nearby as well, but you won't be able to get anything from them at this time. The Inn is just across the square from the shops.

After turning in your ticket at the booth in the city center (receiving three more cards in the process), head to the west into an alley. Here you'll run into Rat Kid again. He'll ask you about the ticket and then say he can get you in if you will be his slave. Tell him NO right now so your able to get the cards from the church in the next area. In Ilia's house you can find Eye Drops and 3g (but you'll have to wait for her to leave if you want to steal her money). In the church you'll find a Potion, Tent, and three cards (Ironite, Goblin, and Fang) by climbing up the ladder and pulling the rope at the top. You can get a Bomb card from Tom if you find his cat (the cat will be all the way back by the statue near the city's entrance) and then talk to him again after.

When you walk back to where the sign keeper was, the Rat Kid will ask you to help steal the ladder. This time agree with him and he will take the ladder back to the dock area. When the Rat Kid leaves a man in a pointy hat will walk into the alley. If he bumps into you, he'll steal some Gil, but if you talk to him, you'll find out he's Alleyway Jack, and he can give you the Tetra Master tutorial when you see him again in the bar. Once that is complete, retrace your steps and follow the Rat Kid down the alleyway.

When you are done, climb up to the belltower. You'll meet the moogles, who will give you the option to save your game, and can give you the Mognet sidequest. This one, Kupo, will give you a letter for another moogle named Monty.

As you follow Rat Kid across the rooftops, search the nearby chimneys to find some Gil. Eventually Rat Kid will stop and exchange names – your character is named Vivi by default, and the Rat Kid's name is Puck. Follow Puck and keep checking the chimneys along the way. Eventually, he will lead you to the play.

At this point you'll be in control of Zidane's party again. This time, though, you're performing a battle on stage, and you have an SFX option in your battle menu to set off special effects. The special effects don't do any damage, but they look good, and that's important when you're putting on a show. Your targets won't take much damage to go down, anyway (which is good, because the showy attacks you're using here won't do much damage anyway).

The next portion will be a choreographed duel between Blank and Zidane. You want to push the buttons as quickly and accurately as possible during this section to earn the favour of the crowd. After your performance the nobles will reward you with Gil, impressing all 100 of them nets you 10000 Gil.

Secret
You can get a Moonstone at this point (or in the encore) if you impress all of the nobles. For lesser amounts, you get lesser items: a Silk Shirt below 100, an Elixer below 80, or an Ether below 50. Don't forget to talk to Queen Brahne as Steiner to fetch your reward.

After the play (and any encores you may wish to perform), head up the stairs and talk to the girl. When she runs away, the Queen will come with two bodyguards. You will now be in control of Steiner, Captain of the Knights of Pluto. Before taking off with Steiner to round up the guards to search for the princess, talk to the Queen. She'll give you a reward for your stage performance.

Head into the guardhouse; here, pick up a hidden Phoenix Down, save and pick up a letter from the moogle, and check the list on the wall. Steiner will have to send all of these guards out looking for the princess; the quest is not strictly necessary, but doing so will net an easy Elixer. Begin by speaking with Blutzen and Kohel in the guardhouse. Then, in the main hall with two staircases, catch Dojebon as he tries to flee. Mullenkedheim is in the guest dining room to the east. Downstairs, Laudo is in the library to the west; after leaving the library, head back in and talk to him again behind the northernmost bookcase to send him looking permanently. Head outside and keep heading south until you find Haagen sitting by the lake. Head west to see Weimar flirting by the doorway; speak to him to send him searching. Finally, head inside the tower and up the stairs to find Breireicht climbing the staircase; if you have spoken to all seven Knights of Pluto, speak to him a second time to receive an Elixer. If you have failed to do so, consult the table below to find the ones you missed:

Finding all of the knights in the castle

Head up the staircase to continue.

Everyone returns to the Prima Vista at this point, and you begin controlling Zidane again. Talk to Ruby and chase Garnet through the ship. After you drop down the escape hatch, there will be a wheel on the engine right by where Zidane starts off. Turn the wheel attached to the engine to the left and to the right to release chests with a Phoenix Pinion and Phoenix Down, respectively. Before you continue, make sure you've got the items you'd like equipped (especially if you stole some decent items in previous fights). After crossing through the engine room, it's time for a fight.