Gameplay switches back to Zidane's party at this point. After regrouping, they find themselves in the Kingdom of Burmecia.

Start by following the mountain range east and north to North Gate. The gate is closed and the party disheartened, but two chests sit in the open, waiting to brighten their day: one holds a Tent and the other a Hi-Potion.

Though there is no place nearby to dig up chocographs, there is one very important chocograph treasure to retrieve, assuming you dug it up in Chocobo Forest earlier.

To go treasure hunting in this area, first find the chocobo tracks located on the very west end of the continent, past the whirlwind, through the small pass in the mountains, and just north of the beach. While standing on the tracks, use Gysahl Greens from the main menu (

) to have Choco appear at your side. Just as you did before, press

to mount him and 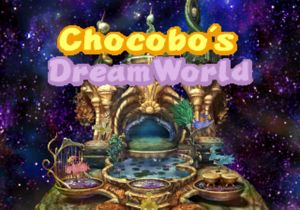 What exactly was in that smoke you inhaled, Choco?

When you think you've found the place, press

to dig up the chest. When opened, it releases a strange smoke that puts the party to sleep and transports Choco to a strange dream world. There, a giant magical chocobo speaks of Choco's desire to settle down in his life and performs a little magic on Choco.

When you come to, Choco is now blue in color and has the ability to wade into shallow water from a beach. This opens up the ability to retrieve a couple of other chocographs, though getting them would mean crossing back across Gizamaluke's Grotto, which you will soon want to do anyways. Therefore, fetching these is not necessarily recommended at this time, but entirely up to you: 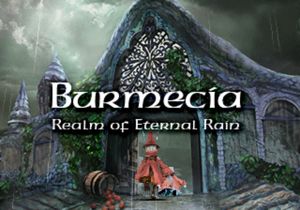 After entering the gates to the city of Burmecia, look behind an overturned cart on the left side of the road for the Cancer Stellazzio key item. Continue north.

On the next screen, the party is attacked by two Type A mages. You have seen their tricks before, so you probably know how to take care of them: Silence is helpful, and physical attacks are effective. After defeating the mages, climb the stairs on the right side of the screen and enter the door at the top. Inside, open the chest behind the staircase to get a Soft. The visible chest on the second story is a Mimic, an annoying enemy that summons Magic Vice's to steal your items. It can give some nice items, but don't feel bad for skipping it. Head through the second-floor portal to a balcony a locked door. Keep going left.

On the next screen, it is very important that you walk, not run, to get the chest on the left side of the screen. If you run, the walkway will collapse and the chest will become unreachable. Inside are Germinas Boots, which are a very nice accessory, but if you have been retrieving the Chocograph treasures, you already have two pair. Once you get the treasure, the walkway collapses regardless of your speed, and you will have to backtrack to continue.

Return outside and enter the ground-floor door on the left side of the screen. Inside, there's a chest in each of the southeast and southwest corners containing a Potion and a Soft, respectively. Climb the stairs to the now-passable walkway. The visible chest on the right side of the screen is another Mimic. In the next room, go to the far end and, when prompted, go onto the balcony.

Zidane will jump across to another room, where a Burmecian soldier sits dying. Talk to the soldier, then check on the far side of the bed for the Protection Bell, a key item. Behind the shelves on the left side of the room is an Ether. Backtrack all the way back to the street.

Here, go once again up the stairs and into the house to your right. Climb the stairs inside and back onto the balcony with the locked door. Ring the bell in front of the door, and, just like in Gizamaluke's Grotto, it will open and the bell will shatter. Inside the door, watch the scene and continue up the stairs.

Enter the door on the main level to watch a small scene in which Zidane helps a man in trouble. This is important to see more story later. Go up the stairs and ignore the first door, continuing left to a similar door that you should enter.

Inside, open the first two chests for a Tent and Phoenix Down. If you skip the big door and follow the path all the way around, another Mimic waits for battle. Enter the big door.

In the fountain-centered city square, go first in the door on the left. You will receive Mythril Spear, an upgraded weapon for Freya. Go back outside and enter the door on the right. Ignore the Moogle for now and get the Thunder Staff for Vivi. When you do so, Stiltzkin appears and offers to sell you a Soft, Hi-Potion, and Ether for 333g. Do it. Not only are Stiltzkin's deals amazing (even selling these items are worth more than 1000g!), they are also usually one-time offers. Most importantly, buying Stiltzkin's items throughout the game will result in a very special gift toward the end of the game. After buying from Stiltzkin, talk to the regular Moogle, Alta. Give Alta the letter you have from Mogki to get a Kupo Nut and a letter for Monev. Be sure to look at Atla's Mogshop (a new option) as well to pick up a Barbut, upgraded headgear for Freya.

You've just been given a Kupo Nut, a rare item of which the party can only hold one at a time. In order to receive the next Kupo Nut when it becomes available, you must return to Gizamaluke's Grotto at this time to give this one to Moguta, the Moogle there. The reward for doing so is not great—the party will randomly receive one of an Ether, Phoenix Pinion, or Tent, and there is no bonus for delivering all available Nuts—but doing so will also give you the opportunity to retrieve the rest of the Chocographs available in the reefs around Lindblum. It's your choice, but patient players may find valuable the opportunity to learn skills, retrieve Chocograph items, and revisit the Frog Catching mini-game.

If you do decide to deliver the Kupo Nut, remember that Gizamaluke's Grotto is straight south of Burmecia, and that Moguta's room is just to the right of the door to Gizamaluke's lair. Once you've delivered the Kupo Nut and received your reward, exit the Moogle's room, exit the circular Giant Bell room to the south, and the big courtyard to the southwest. Keep going that way, and you'll find yourself back in the Kingdom of Lindblum.

Once there, go back near Chocobo's Forest (west of the small bridge) and use a Gysahl Green on the Chocobo Tracks to bring Choco to this area. Once on him, press

to view your Chocographs. If you do not have both of the following, play Chocobo Hot & Cold in the forest until you do. When navigating the shallow water, use

to view the fullscreen map, which lightly shows the areas Choco can currently reach. The rewards are quite extravagant:

While in the area, before heading back through Gizamaluke's Grotto, swing through Qu's Marsh and play the Frog Catching Game. Depending on how fertile the frogs have been while you've been gone, you may be able to catch 9 frogs for the Silk Robe, light armor that, while not quite as hearty as the Magician's Robe, teaches the "Ability Up" and "Loudmouth" abilities very valuable to your spellcasters. Remember to leave an adult male and female frog, as well as any golden frog that may be present, so more frogs will become available later in the game.

Once done, head back through Gizamaluke's Grotto, north through the Kingdom of Burmecia, and back into Burmecia proper. Retrace your steps up the street, into the house on the right, onto the balcony and up the stairs to the city square where you got the new gear and met the Moogles.

If your party is even slightly damaged, visit the house with the Moogles to use a tent. Back outside, before heading north toward the palace, equip some armor and accessories that reduce damage from thunder attacks (downgrading to a Silk Shirt is worth the hit to defense; downgrading to Rubber Helm is almost certainly not). Also make sure that Zidane has the Bandit ability enabled. Freya has an emotional moment and sneaks into the castle with Zidane following closely behind. At this point the player gets a little more of Freya's backstory, and the party meets a new mysterious foe, but the boss battle is with someone you have met before: