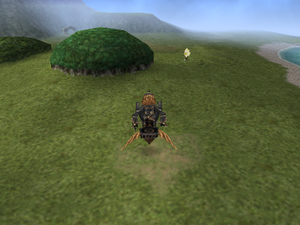 Chocobo Hot & Cold is a mini-game that may be played in Chocobo's forest near Lindblum. After receiving Choco the Chocobo, go back to the forest, talk to Mene, and he will let you play for 60g. In this game, use Choco's clues to find buried treasure--mostly junk worth precious few points, but also clues to find other buried treasure out on the world map. Later in the game, this is much more valuable, even leading to characters' ultimate weapons!