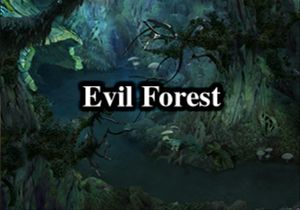 After a cutscene you will find yourself in a wooded area known as the Evil Forest. Here you find out that Princess Garnet was also thrown off the Prima Vista from the impact. You are also taught about ATE (Active Time Events) which will show up plenty of times throughout the game. To access an ATE, press

. Activating the ATE will show you Garnet and Vivi running away from something.

As soon as you have learned about ATE, grab a Phoenix Down from the top side of the junk pile above the Moogle and then talk to the Moogle to save your game. Once you have done so, move onto the next area accessed through the large tree trunk. There is nothing special in this area, but to make the upcoming events easier, it's best to train Zidane to level 4 or 5 and steal a few potions from the creatures in the area. When you are happy with his level carry on to the next screen.

On the next screen you'll first see Vivi backing away, and instantly you'll be able to tell something is wrong. Steiner happens to be here now, shouting at a strange looking creature from the forest. You'll be thrown into battle.

Following the battle, Zidane finds himself back on the Prima Vista, arguing with Baku. When the conversation has finished, look next to Baku for a chest with Bronze Gloves. Walk to the left to go downstairs and trigger several new ATEs. At the bottom of the stairs is another chest containing a Wrist. Look in the room behind Blank to talk to Vivi and collect a few more items: an Ether is in the chest, and 116g is on the top bunk.

Upon leaving Vivi's room and talking with Blank, head through the door to the left. Grab the Ether in the chest at the bottom and go down the stairs. Here, search the northern part of the room for a Rubber Helm, then go south a room to find a Leather Hat in the chest. Backtrack a room and head east to find Baku. Be sure to get the Potion from the chest before reentering the cargo room, because now you're in for another fight.

Upon Baku's defeat, head back upstairs and into the western storage room to re-recruit Steiner into your party. Head 'back' into that room again to collect an Ether from the chest before going east into Vivi's room again. After talking to him, head back downstairs and south to receive some hints as well as Blank's Medicine.

About Abilities
Most pieces of equipment contain abilities, some of which are used in battles, others of which should be equipped on the Abilities menu screen. To use or equip an ability, the character normally must have the associated equipment equipped, though after filling the ability's AP meter by winning battles, the equipment prerequisite disappears and that character permanently learns that ability.

Before heading back out into the enemy-infested forest, be sure to equip new, improved equipment and abilities on everyone in your party. Especially important is giving Vivi a Silk Shirt to learn Thunder and giving Steiner the 'killer' abilities. The leather wrist can either be given to Vivi to teach him Blizzard or be given to Zidane to teach him Beast Killer. These will all come in great handy throughout the next few areas.

If need be, you can restock on basic items by talking to Cinna and heal your party back inside the Prima Vista in the bed Vivi was sleeping in previously. Note, however, that you should not sell any equipment you may have replaced with better models. Throughout the game, you will encounter synthesis shops that can turn much of this old equipment into new, better weapons and armor. Unlike some previous Final Fantasy games, you should not need any more inventory space, and if you need more Gil, a better solution is to fight more battles and steal more items. When ready, continue into the forest past where you earlier fought Prison Cage. Several screens later, you will approach a natural spring. Pressing

on the fountain will restore your characters' HP and MP. There are no monster encounters in this area, so feel free to heal and talk to Monty the Moogle. Give him the letter you have been holding for him and read it twice to have him show you his letter from Stiltzkin. Then save and heal for a potentially difficult boss fight two screens later.

After the battle, run as fast as you can to avoid battles with the pursuing Plant Spiders. If you do end up in battle, roast them all with Vivi's Fire (press

to target all enemies at once). Once out of the forest, learn (or review) a few of the finer points of the game with the Moogles and receive the Moogle Flute. Finally, you will find yourself out on the world map.

Controls out here are similar to most areas, but press

to call Moguo the Moogle at any time using your Moogle Flute. This will let you save or use a tent wherever you are as long as you're on the world map screen.

This area is optional. Your next objective is to go through the Ice Cavern to the south, but if you don't mind a pit stop, head west through a canyon to the North Gate (press

to enter when the '?' appears at the top of the screen). There is not much to do here—as Zidane said, the gate is sealed—but the characters will notice some strange activity beyond the locked door. You can buy Potions from a woman behind the gate, and grab another Potion and an Eye Drops in the chests behind the broken fence. That's all there is to do here, so follow Zidane's instructions to the next area.