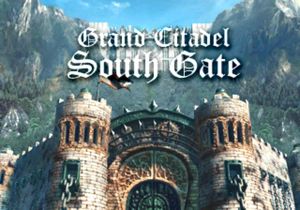 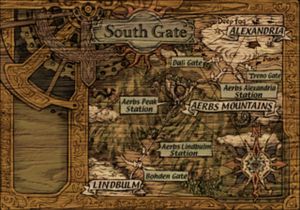 Leaving Zidane's party to consider the now-defeated Gizamaluke, we rejoin Steiner and Dagger, who have arrived at the Grand Citadel South Gate, which is still partially destroyed from our party's earlier activities.

After getting inside Bohden Gate, Steiner needs to find a place to hide. Before talking to anybody, open the chest just left of the entrance; it contains Multina Racket, a long-range weapon for Dagger. Clear out the alley to the east by talking to the creature polishing the gate to the east, then the man in overalls to the south, then the woman walking around to the west. When your first attempt to hide is interrupted, pick up the Gate Pass from the ground.

Once Dagger has emerged from hiding, unequip whatever valuable armor and accessories you might have equipped, since whatever these two have equipped is unavailable to the other party members. Don't worry—you will have a chance to reshuffle their equipment and abilities before their next fight. Restock your supplies at the item shop, grab the Potion from the chest in plain site, and save and pick up a letter to Nazna from Grimo the Moogle. Then talk to the cable car conductor, show him your Gate Pass, and continue on your way.