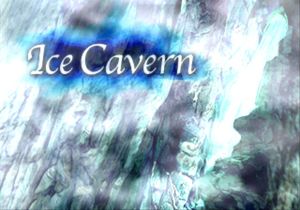 Follow the southern cliff wall from the North Gate or travel directly south of the Evil Forest to a blue cave in the cliff wall. The Ice Cavern is a beautiful cave filled with secrets. Watch for treasure along the way, but watch out, too, for sprays of cold mist. Get caught in one and you'll be instantly forced into battle. Walk into them and defeat the enemies if you're trying to level up your characters and their abilities; wait until the sprays have dissipated if you're trying to stay healthy or move quickly.

when you see the '!') Watch out for the mist jets as you jump up another ledge and continue into the next room.

In this room, go up the stairs on the right and press

to have Vivi melt the wall and reveal an Ether. Head back down the stairs and around the back of the next staircase to get a Potion from that chest. Head up the stairs into the next room.

The next room has several forks in the path. Take the first left to the top of the screen, where Vivi can blast another false wall for an Elixer. Then head to the lower-right part of the screen, where two chests are sitting on separate platforms. Before moving anything, get a Potion from the top chest, then stand to the right of the iced-over log and have Vivi move it into place to retrieve a Mage Masher from the lower chest.

The next room has several treasures as well. Get the Phoenix Down from the chest on the right, then move to the left for another fake wall, behind which lies a passage to a Leather Wrist. Head north into the next room.

When you hit a fork in the path, take the safer-looking left path first to find Mois, a Moogle encased in ice. Freeing him lets you use his services, including the chance to deliver a Mognet letter to Gumo. If your feeling roughed up and have plenty of Tents, you may want to use one before the next fight. Either way, save, then retrace your steps and head down the icy path to the right and get ready for a fight.

After defeating the Black Waltz and his minion, the strange blizzard will subside and your party will be revived. Continue up the path, over the stream, and out the cave. Outside, your party will have a funny conversation, and you'll have a chance to pick a pseudonym for the Princess. After that, you'll find yourself on the other side of the cliffs on the world map, ready to head to your next destination. That might be the Village of Dali, but for those who like to explore, there are some intriguing detours that can be had.

None of the following optional side-quests are particularly interesting or of significant value to you right now, but should be taken note of for future reference or to complete certain other optional quests.

Secret
Throughout most of the rest of the game, you may run into a special kind of random battle when travelling through forest areas on the world map. The Ragtime Mouse asks true and false questions, to which the player must respond correctly if he is to obtain valuable items and massive Gil later in the game. You will know the battle because of special Carnival-like background music. Do not confuse the Ragtime Mouse with the Friendly Mu discussed in this section, however. The mouse's questions will be trivia about the in-game universe. You can run into this special creature up to four times this disc, and looking out for such an encounter is highly recommended.

North of the Ice Cavern exit is the South Gate, an uninteresting passageway similar to the North Gate you may have come across earlier. This gate, however, is manned by a single guard who will tell you a little about the area and informs you that a woman (Mary, the "part-time worker" indicated at right) occasionally stops by to offer rest (which costs 100g and completely heals your characters' HP & MP) and the usual items for sale.

That's all there is here, however, so feel free to quickly be on your way.

Of much more value is a friendly furry creature in the forest just southeast of the village. Run around in there until you run across a friendly Mu with his own friendly music. He asks for an Ore when you see him, and if you give him one right away, he'll thank you, tell you to say hello to a "Mr Ghost" and runs away, leaving you with 10 AP (be sure you have valuable unlearned abilities equipped on your characters, especially Zidane's Bandit) and a Potion.

Note: this is the part of an optional boss side-quest later in the game, so if you plan to participate in all optional activities, do not continue until you have run across this furry creature and satisfied his want.

Observatory mountain is the large peak with a spiral staircase right next to the Village of Dali. Head there, and before going inside, grab a Hi-Potion from a chest hidden south of the door, then grab 135g from the far right side of the screen. Then go in the door. Here, you'll see an old man enjoying his coffee and instructions about coffee delivery posted on the wall. Talking to the man yields little information, but press

while looking at the floating model airship to receive a quest from the man. It seems he's looking for three rare kinds of coffee. You cannot yet fulfill his request, however, so when you are through with the conversation, head out of his shack and back to the world map. You are ready to proceed to your next destination.