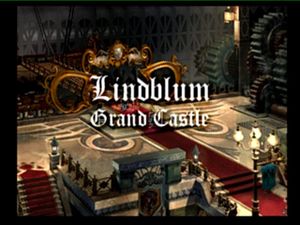 After the battle with the Black Waltz—and a narrow escape by air—the party finds itself in the airship dock of Lindblum Grand Castle, a massive fortress with a magnificent palace in the middle of a sprawling city.

The guards at the dock stop the party briefly until Minister Artania lets them through. Instead of following the minister, however, go up the staircase on the right side of the screen. Here, go in the first door to enter a guest bedroom. Open the two chests for a Glass Armlet and an Ether. The Moogle here is Mogki, for whom you have a letter. Read it, then select Mognet again to receive yet another letter for Alta. Save.

Head back the way you came to the room with the fountain, this time taking the exit at the bottom of the screen. Step onto the lift and ride to the throne room. Here, the party finds a big surprise, after which everyone breaks for lunch.

Zidane can't stand the rich castle food, so he heads to a nearby pub instead. There, he meets Freya, a female dragoon and an old friend of Zidane's. The scene then switches to Garnet's conversation with the Regent, who reveals all sorts of plot points.

Finally, you regain control of Zidane, who is in his room at an inn in Lindblum's business district. Save in the next room, where you can also read a letter from Ruby. Now get ready to find a whole lot of items exploring the continent's biggest city! Head downstairs and search the southwest corner of the room for 163g. Exit the inn, then head north up the street to the shopping area.

In the shopping area, enter the door due north of the pickle seller. Here, open the chests for a Hi-Potion and an Echo Screen, then head up the street just to the west. This is Church Street. Near the entrance of the church, look under the tree for a Tent, then head inside the building and up the scaffolding ladder for a Leather Plate. Exit the church, go back to the shopping area, and walk east to reach the Business District Square.

The Square contains several shops Zidane can actually use. Alice's Item Shop is on the North side (according to the handy compass rose in the fountain) and Dragoos's Weapon Shop is to the Northeast. To the Northwest is a Synthesis shop: a new special kind of shop that combines your weapons and armor into unique new creations for a fee. Examine the workbench in the north side of the shop for a pair of Silver Gloves at no charge to you.

Before equipping the new equipment, however, go all the way back to the street you started on, then further south out Hunter's Gate to Lindblum Plateau.

Out on the world map, get in some battles to finish learning some of the abilities on his current gear, especially Bandit. This will allow you to switch to the thief's swords from the Synth without losing those abilities. For the upcoming battles in the Festival of the Hunt, this will cut down the fight times by a decent amount. Be wary of the small forest on the plateau, however, as one random encounter there involves two Bombs that can make quick work of Zidane at these levels.

Go straight east of Lindblum to Pinnacle Rocks, where a sign warns of spectral sightings, but the only real presence are two chests at the end of a short path. The visible chest holds an Elixir, while a hidden chest next to it contains a Phoenix Down.

Back in the city, enter the doorway across from the inn. This is an air cab station. Climb aboard the air cab on the left side of the screen, and from the destinations presented, select the Industrial District.

Climb the stairs to exit the underground station. Here in the Industrial District Square, the only item to pick up is a Leather Wrist hidden at the very bottom of the screen (southeast of the cat).

Travel up the stairs to Industrial Way. The prominent building is Doom Pub, which contains nothing but gossip right now. Outside, however, just to the north of its entrance, a Bronze Vest is waiting to be picked up next to the sick gentleman. At the end of the road is a residence, upstairs in which are two chests which contain a Mimic Card and a Steepled Hat. Help yourself to both. Return to the air cab station and head to the Theater District, our last stop in our whirlwind tour.

Once you arrive in the Theater District, step outside into the Station Area. Hidden behind the fence in the foreground, just south of the station, is 127g just waiting to be picked up. The nearby building is a Studio, in which reside a painter named Michael and a chest containing Ore. Take the latter; leave the former.

Head around the path on the left side of the screen, but don't enter the building just yet. Keep going and head down the stairs to talk to the mob of fan club members. Watch the scene and follow the man in the Moogle suit back to Michael's house. There, you'll receive the Autograph key item automatically. Search in Michael's painting supplies for the Moogle Suit.

Now head back to the building you skipped earlier--the Tantalus Hideout. Watch the ATE scene, then empty the three chests of cash (447g in all). Climb the latter to the left to yank the rare Mini-Burmecia action figure.

After you have explored the town a bit and you feel that you are well-equipped, hop an air cab to return to the castle.

There, go to the bedroom where Dagger was staying and talk to Steiner. A moogle is on this room's upper level if you would like to save. Try to get on the lift. When stopped, go back one room and talk to the sleeping guard on the sofa to obtain a disguise. Now incognito, Zidane will have no trouble entering and operating the lift. At the top, go up both sets of stairs to find Dagger. When looking through the telescope, press

on each of the six points of interests noted by the "!" icon. The rest of the scene will play out automatically, and you'll find out a little about what the other characters have been thinking about the meantime.

Be sure you are properly equipped before starting this section.

The next morning, the party assembles at the start of the Festival of the Hunt. Before the hunt begins, the partipants will be asked what they want as a reward. Their choices are noted in the sidebar. At that point, the party splits and Zidane will be tasked with going through each section of the city, eliminating monsters along the way for points. The character with the most points when the timer hits 0 will win their prize as well as the title of Master Hunter.

To begin the hunt, start off by going straight to the theater district, killing all the monsters you see along the way. When you go past the Tantalus hideout and down the steps, you will see three barrels. Wait in front of these barrels for a monster to attack you, then make your way back up to the taxi. If you have more than six minutes after the Theater District, you can head to the Industrial District for a few more points; otherwise, go right to the Business District.

This is a small area, so the monsters should be fairly easy to locate if you run around and check out the area. Keep an eye on the clock, though. Once it hits about six minutes, stop whatever you're doing and catch an air cab to the Business District posthaste.

Upon entering the business district, be sure to kill all the monsters you come by (one monster will pop out of a building on the right side and another will swoop down and attack you on the left side of the street). When you enter the next section of the business district where the pickle salesman usually is, you will see a monster on the left side attacking someone; deal with it, then move towards the shopping center where the fountain is located.

When you enter this section, you may notice a large monster there attacking some civilians. Upon engaging the monster, Freya will come assist you in killing it, so do not worry if you do not think you are strong enough to defeat it alone. If you do not see this monster, exit this area and re-enter until the monster shows up. You will want to kill this monster, as it gives you over 80 points and essentially gives you an easy win for the Festival of the Hunt:

After the hunt, the winner is awarded his or her prizes, but the merriment is cut short as bad news arrives from Burmecia. With Vivi and Freya now in your party, take the elevator to the middle floor and take an air cab back to the Business District to upgrade your party's equipment. The Cotton Robe and Glass Buckle, both available at the Synth shop, are good items to have on hand. It might be a good idea to grab an extra one of each for the party member you will be picking up on the way to Burmecia.

With that detour out of the way, take an air cab back to the castle. Ride the elevator down to the Base Level this time, where two trolleys are waiting to transport you to your desired gate. Although the left trolley goes directly to Dragon's Gate, a ride on the right trolley takes you to the harbor-adjacent Serpent's Gate, which hides a Wyerd Card in a chest on the platform.

Take the trolley to Dragon's Gate, where Moonte the Moogle has a letter from Stiltzkin and can save your game. A merchant here has the usual supplies, if you forgot to pick something up in the Business District. The gate is open, so when you're ready, head out the door and on your way to Gizmaluke's Grotto.