As a thief, Zidane has the ability to steal items from most enemies. Doing so is an invaluable way to generate income, stock up on needed healing items, and build up an inventory of weapons and armor for equipping and synthesizing. Zidane can also use 'Skill' abilities, which exploit his nimble nature for various effects.

Her highness can summon powerful monsters to deal massive damage to enemies, though doing so consumes massive amounts of MP. The princess can also cast White Magic to heal and protect party members.

Vivi's black magic can be inflicted upon enemies for large amounts of often-elemental damage. When in the party alongside Steiner, Vivi activates Steiner's Magic Sword capabilities.

Steiner has the ability to pair up with Vivi for a "Magic Sword" attack, adding a magical element to Steiner's physical attack. Used most effectively when casting a spell that is the monster's elemental weakness. 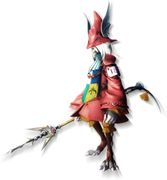 As a Dragoon, Freya can use the "Jump" command to leap high into the air, temporarily removing herself from battle. Some time later, Freya will automatically come crashing down on the targeted enemy with the "Spear" ability, which deals a large amount of physical damage.

Eiko is also a white mage much like Dagger. Also like Dagger, she can use summon magic. However, Eiko generally has the better White Magic of the two, while Dagger has the more powerful summon magic. 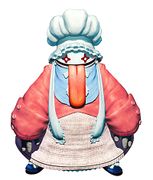 Quina is a gender-ambiguous chef of the Qu tribe. Like all members of the tribe, Quina is a Blue Mage who can learn new action abilities by eating ordinary enemies with the Eat command. Whether Quina learns a new ability—and what ability s/he will learn—depends on the type of enemy eaten. Some enemies "taste bad" and yield no ability (though eating it does instantly KO the enemy). Others yield interesting and powerful techniques of various use. Eating normally requires the enemy to have 25% of its maximum HP or less. Under Trance, "Eat" becomes "Cook", which allows Quina to eat enemies with 50% or less of their maximum HP. Quina starts with no Blue Magic abilities, but can quickly learn a varied and useful set of unique abilities.

Amarant is a Jack-Of-All-Trades. Equipped with claws, he can be equipped to deal great physical damage. He can also keep up the party's MP and HP with Charka, or throw a weapon for great damage. With his Flair Skill, he can do a variety of things other than Chakra, such as Revive a party member, inflict doom, or use spare change.

This is a list of characters who you are only able to play for a short period of time.