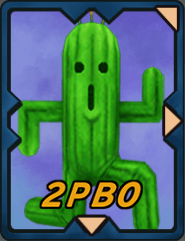 Cactuar card with stats of 2PB0

The arrows on the cards show in which direction the card can attack. If two arrows of cards directly point to each other a battle will ensue. If the arrow points to a side of a card where there is no arrow pointing back, the battle will automatically be won.