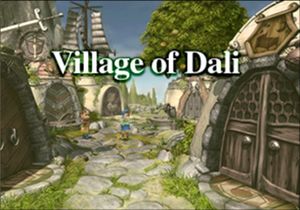 The Village of Dali is a quiet country village where the party hopes to get some rest and plan their next move. Upon entering the village, Vivi takes special note of the town windmill…and a couple local children take special note of Vivi.

Before they do anything else, however, your party will head into the inn to rest (100g will be automatically deducted from your inventory).

The weapons shop is across the street from the Inn and though Eve the shopkeeper offers mostly the same items you have already seen, she does have Feather Hats, which are an upgrade for most characters and teach Bright Eyes and Add Status, valuable Abilities both. Buy three. Back outside, check the north side of the weapons shop for 120g. The Item shop is the northeastern building just to the right of Vivi. Head in there if you want the usual medicinal items for the usual prices. Then walk into the Windmill and pick up Aries off the floor behind the spinning shaft. This special coin is part of the Stellazzio side-quest, which has some very nice benefits, so do not miss it! There are two treasure chests in the attic, but you cannot reach them yet. Go back outside and talk to Vivi.

Find Dagger in the weapons shop, then head back into the Inn. Talk to her again there to trigger a scene and to decide to go look for Vivi. Head straight north to where you saw him earlier to find a clue to his current whereabouts. Then head into the windmill and examine the domed hatch near the entrance. Climb down the ladder into the underground tunnels.

In the next room, examine the small barrel to reveal Kumop, a Moogle. Select Mognet to receive a letter for Mogki. Examine the right side of the pulley wheel and choose to kick it to release a chest with another Potion in it. Climb the crates in the back of the room to reach the chest with an Ether in it. Proceed through the door to the next storage area.

Here, go down the middle aisle and look in the chest to your right to pick up a Leather Wrist. It should be an upgrade for someone in your party. If that character is Vivi, just hold onto it; otherwise, equip it. Climb the boxes to your left to retrieve an Iron Helm.

After heading through the next door, your party will once again be united with Vivi. Equip him with any items you picked up in town or in the tunnels, especially a Feather Hat if you purchased one. Open the chest by the weird machine to get 95g, then head through the north door (doing so is optional and will release monsters into the area, but the treasure is worth it). You will immediately be thrust into battle, but only with a couple of easy ghosts. Inside, immediately press

to examine the machine, then gather the treasure from some chests. In front of you is a Phoenix Down, a Potion is partially obscured by the machine, and a Phoenix Pinion is completely obscured by it. Head back through the door and eastward down the corridor, stopping to examine the workings when the action icon appears above Zidane's head. Eventually, you will uncover a very interesting secret about the underground operation.

At this point, you will immediately switch to controlling Steiner, who, while the rest of the party was underground, has gone to the top of the nearby mountain to look for the cargo ship. After talking to the old man on the mountain, descent the staircase and talk to him again in his hut. After that conversation, leave the area to automatically end up back in Dali. A scene ensues, as does a familiar-looking boss fight.

After the battle, you have the choice to stay and rest or continue on the cargo ship. Feel free to stay if you need to heal or want to buy some goods. Otherwise, continue onto the airship.

Climb up the ladder. Several events take place, after which, Zidane and Dagger find themselves on the bridge of the airship. Take the chance to fully equip Zidane before heading out to fight yet another familiar boss.