The following table summarizes some relevant characteristics of the 14 playable characters.

All names used are the default names. 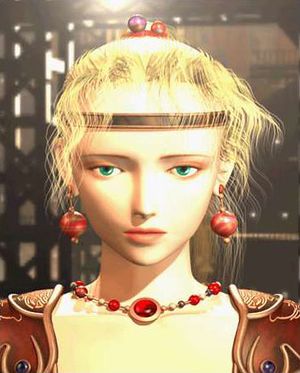 Although Terra can equip a wide variety of weapons and armors, her primary role is as a spellcaster, and she is one of the only characters to learn spells naturally. She appears at the beginning of the game, under the control of the soldiers Vicks and Wedge. The Slave Crown they were using to control her is quickly removed, but her memory is little more than a blank afterward; eventually, however, her discovery of her true heritage unlocks the ability to become by far the most powerful spellcaster in the game. 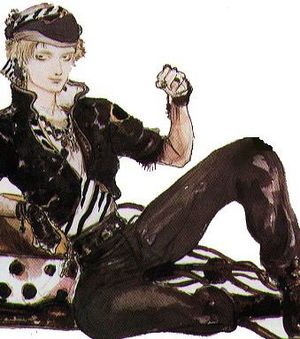 Locke, a treasure hunter, has the Steal ability. This gives a chance on retrieving an item from an enemy in battle (that is not otherwise dropped randomly.) He's very protective of his image as an adventurer and takes poorly to being referred to as a common thief, but has an odd weakness when it comes to damsels in distress. 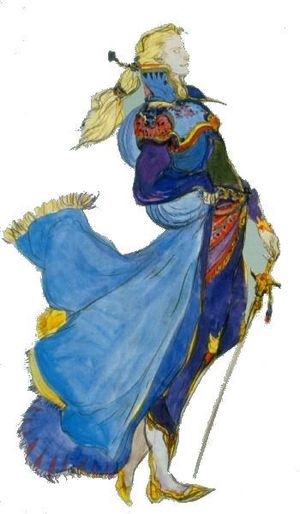 King Edgar is seen as a bit of a ladies' man, but he's quite popular among the people of his kingdom. He's also quite the engineer, and is fully capable of unleashing advanced technology in battle. His Tools make him one of the strongest characters in the early game, but as his arsenal expands he usually manages to keep himself useful to most teams. He keeps a trick two-headed coin with him at all times in memory of promises made in the past. 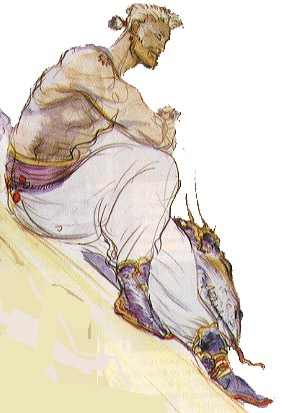 Sabin, Edgar's brother, abdicated from the throne and instead pursued the martial arts because he didn't want the responsibility royalty entailed. His training certainly paid off; he's very much one of the toughest party members. His Blitz techniques require the player to enter Street Fighter-style button inputs to activate and can be failed if an input is messed up, but they are incredibly powerful and require no MP. In particular, his Fire Dance makes him one of the few party members able to unleash an area attack early in the game, and his AuraBolt is one of the only Holy-elemental attacks in the game.

Celes is the product of a Imperial human weapon project, an experimental procedure to create humans capable of naturally using magic. This makes her a bit of a hybrid, well-suited to both physical attacks but also learning magic naturally as Terra does. She's a tough woman, but that exterior serves to hide the deep regrets she holds for her past. Her special skill, the Runic Blade, allows her to use her powers in conjunction with certain weapons to actually protect her party by absorbing magic attacks, forcing them to harmlessly target her and using them to replenish her own MP reserves.

Setzer is the high-roller owner of one of the world's only airships, which he has configured into a flying casino for his own amusement. He's a bit jaded at the state of the world, but he's got a good heart, and his gambler's nature makes it hard for him to resist the call to adventure. In battle he fights with thrown playing cards, but he can also invoke the Slots ability to create chaotic, unpredictable battle effects which can spell instant doom for enemy and ally alike.

Shadow is little more than an emotionless killer, or so it seems, a mercenary who joins out of lust for gold. He backs up his fee with excellent physical abilities. He has great speed and agility. His Throw command is very useful, allowing him to hurl weapons at the enemy for a higher damage. Weapons special to this are the Shurikens, Fuma Shurikens, and various elemental and Shadow scrolls. In addition, his faithful dog Interceptor will occasionally block attacks on his behalf and counter ferociously.

The noble warrior Cyan is one of the most famed and powerful retainers of the Doma Kingdom, until tragedy strikes and marks him with a deep sorrow. In combat, he's a tough character with high HP and attack power, and wields special Katanas. His SwordTech skill is very powerful but requires significant time to execute, allowing him to unleash more and more powerful skills as time is allowed for him to charge up.

Gau is a wild boy found wandering the Veldt. He seems to have raised himself from a very early age, and gained a form of rapport with monsters that no other human can match. When fighting on the Veldt he gains the ability to Leap away from the party, leaving to join the monsters and rejoining the party a short time later. Spending time with any monster allows him to memorize their abilities, and in combat he can enter a Rage, causing you to lose control of him as he emulates that monster's attacks. He's chaotic and unpredictable, but depending on the monster being copied he can be unbelievably strong.

Mog is one of the Moogle clan living in the mountains of Narshe. He might not look like much, but he has the ability to unleash magic through his unique Dances. He can also equip a special item called a Moogle Charm; when Mog is with the party and wearing his Moogle Charm, random encounters are completely disabled.

Strago is a Blue Mage from the town of Thamasa. He can equip only lighter armor, and primarily wields rods and staves. Though his physical attributes are quite low, his Magic attribute and MP are higher. The old man's special skill is Lore, which allows him to command unique spells learned from monsters. In order to acquire these spells, he must first experience them, which (in the case of beneficial or rarely used Lores) may require controlling the monster in question.

Relm is Strago's granddaughter, and Shadow’s daughter. She is a resident of the town of Thamasa. She has the highest base Magic attribute of any character, although she's physically very weak. Her special ability allows her to express magic through the power of her paintings, letting her Sketch images of enemies so realistic that the sketches themselves will attack on her behalf. She can also gain the power to directly Control enemies, which can be very useful in order to help her grandfather master some of his most powerful and useful Lore abilities.

Gogo is a mysterious entity found in one of the unlikeliest of places. He (it?) has average attributes, not exceeding in any particular aspect, but his Mimic skill allows him to copy the last attack used without consuming MP or any special requirement for the attack. In addition, his skills as a Mimic are so incredible that he can actually customize his own command menu, allowing him to take on the special command abilities of any other character in the game... although his average stats generally mean he won't be quite as good at them as their regular users.

Umaro is a Yeti living in the mountains of Narshe. He's best friends with Mog, and will only join up with you if Mog tells him it's okay. He's not able to be controlled in combat, instead preferring to go Berserk on your foes, but what he lacks in utility he makes up for in brute force: Umaro is easily one of the heaviest-hitting characters in the game. He can't equip much gear, but there are a couple of special Relics that expand his repertoire of techniques to include ice blasts and throwing attacks... although he might need a bit of assistance from one of his teammates for the latter.