Unlike the previous installments in the Final Fantasy series, there are no jobs/classes in Final Fantasy 7 and no distinction between White and Black magic. The "Traditional class" tab shows a parallel with the jobs from the previous games, based on the characters' attributes. 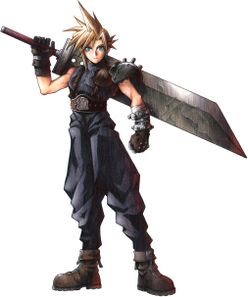 Cloud Strife, クラウド・ストライフ (Kuraudo Sutoraifu, クラウド・ストライフ?) grew up in the sleepy mountain town of Nibelheim, where he never quite fit in with the other children in the village, though he often tried to get closer to his next-door neighbor, Tifa Lockhart. Hoping to prove his worth, at fourteen he set out to join SOLDIER like his hero Sephiroth. Saying goodbye to Tifa, he left for Midgar to pursue his dream. Seven years later, the two meet again in the Sector 7 slum of Midgar. Tifa has joined AVALANCHE, a rebel group fighting the corrupt and powerful Shinra Electric Company. Cloud, now a mercenary, is hired by the group to destroy the Number One Mako Reactor.

In the previous Final Fantasy titles, the red mage was a "jack of all trades", who could do a bit of everything but did not excel in anything. Cloud is a jack-of-all-trades as well, but he excels in both the physical and magical departments; he can then be classified as "hero", although this class is mutuated from other series (e.g. Dragon Quest). 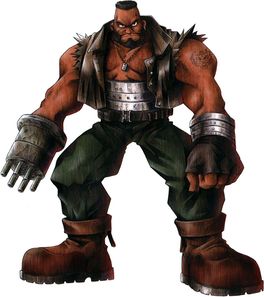 Barret Wallace, バレット・ウォーレス (Baretto Wōresu, バレット・ウォーレス?) leader of the terrorist group AVALANCHE, and bitter enemy of the Shinra. He grew up in the mining town of North Corel, where he was involved in a decision to have the town switch from mining coal to using Mako energy, against the protests of his best friend Dyne. The decision turned out to be a disastrous one, and he lost his arm and his friend after an attack from the Shinra. Following the incident, Barret had an operation to have his arm replaced with a gun, and adopted Dyne's now orphaned daughter, Marlene. Seeking answers he couldn't find in Corel, he traveled to Cosmo Canyon where he learned about the harm the Shinra and their Mako reactors were inflicting upon the planet. He eventually ends up in the Midgar slums, in command of a group called AVALANCHE, a rebel group fighting back against Shinra.

In the previous Final Fantasy titles, the warrior was a job with great physical attributes, but low dexterity and limited or no magic at all. Barret corresponds well to this characterization.

Tifa Lockhart, ティファ・ロックハート (Tifa Rokkuhāto, ティファ・ロックハート?) is bright and optimistic. Tifa always cheers up the others when they're down. But don't let her looks fool you, she can decimate almost any enemy with her fists. She is one of the main members of AVALANCHE. She and Cloud were childhood friends, and although she has strong feelings for him, she would never admit it.

In the previous Final Fantasy titles, the monk was a physical job similar to the warrior (see #Barret), but with lower defense/vitality and higher dexterity. Tifa corresponds well to this characterization. 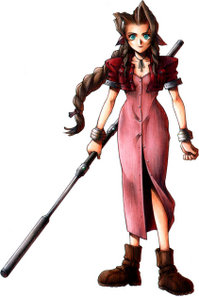 Aeris Gainsborough, エアリス ゲインズブール (Earisu Geinzubūru, often transliterated as Aerith from Japanese sources?), is a young, beautiful, and somewhat mysterious, Aeris met Cloud while selling flowers on the streets of Midgar. She decided to join him soon after. Her unusual abilities enable her to use magic, but she seems more interested in the deepening love triangle between herself, Cloud and Tifa. The English version translates her name to Aeris, although in certain circles she may also be known as Aerith.

In the previous Final Fantasy titles, the sage was the job with the best magic attributes and some of the lowest pysical attributes. Aeris corresponds well to this characterization. 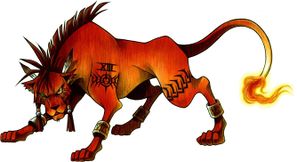 Red XIII, レッドＸＩＩＩ (Reddo XIII, レッドＸＩＩＩ?) just as his nickname implies, he is an animal with fire-red fur. But under his fierce exterior is an intelligence surpassing that of any human. His sharp claws and fangs make him good at close-range fighting, but other than that, not much is known about him. Even "Red XIII" is clearly just a nickname.

In the previous Final Fantasy titles, the thief was a job characterized by a very high dexterity. Red XIII corresponds to this description, although he does not share the personality and attitude of a thief.

Spoiler
It is later revealed that Red XIII's real name is Nanaki. 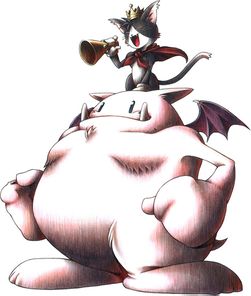 Cait Sith, ケット・シー (Ketto Shī, ケット・シー?) rides around on the back of a huge stuffed Mog he magically brought to life. Megaphone in hand, he's always shouting orders and creating dopey attacks. When his slot machine attack works, the enemy lines look like an overturned toy box. His hobby is fortune telling, but like his personality, it's pretty unreliable.

In the previous Final Fantasy titles, the white mage was a job with high magical attributes, low strength and health points (HP) and even lower dexterity. Cait Sith corresponds well to this characterization. His Limit Breaks follow the same "white mage" trend, too. In fact, in order to learn new limit breaks, a character has to defeat many enemies. Cait Sith, instead, is the only character with 2 limits instead of 7, therefore he can focus on healing, support and debuff abilites (previously known as White Magic, indeed).

Spoiler
It is later revealed that he is in fact a toy-robot controlled by Reeve Tuesti, of the Shinra Corporation. 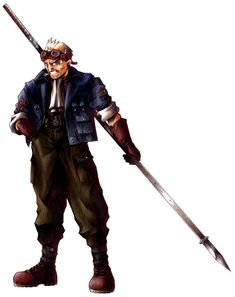 Cid Highwind, シド・ハイウインド (Shido Haiuindo, シド・ハイウインド?) is a tough-talking, warm-hearted old pilot who hasn't forgotten his dreams. There's no better pilot by air or sea. He believes someday he'll fly to the ends of the universe. With his handmade spear and knowledge of machinery, he throws himself into any attack regardless of the danger.

In the previous Final Fantasy titles, the warrior was a job with great physical attributes, but low dexterity and limited or no magic at all (see #Barret). Furthermore, the dragoon is a similar job characterized by the use of spears and jumping techniques, exactly like Cid. 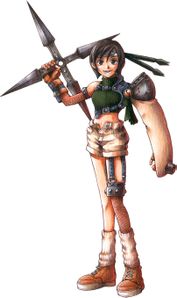 Yuffie Kisaragi, ユフィ・キサラギ (Yufi Kisaragi, ユフィ・キサラギ?) comes from a long line of Ninjas. She forced herself into the group just to get a "certain something." She's sneaky, arrogant, and way selfish. But with her super shuriken and her special skills, there isn't anyone else you'd rather have on your side in a fight.

In the previous Final Fantasy titles, the thief was a job characterized by a very high dexterity. Yuffie corresponds to this description; the difference between her and #Red XIII is that she has far higher luck and far lower spirit. 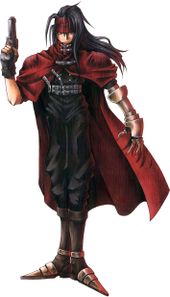 Vincent Valentine, ヴィンセント・ヴァレンタイン (Vinsento Varentain, ヴィンセント・ヴァレンタイン?) is a mystical man, stern and upright while at the same time dark and mysterious. His past connection with Shinra, Inc. is what made him join Cloud and the others. He may seem frail at first glance, but hidden inside his body lurks a fearsome power.

In the previous Final Fantasy titles, the black mage was a job with high magical attributes, moderate dexterity and very low strength and health points (HP); a black mage stays in the back row and attacks with long-ranged spells. Vincent corresponds perfectly to this characterization, using shooting weapons instead of black magic.

In most role-playing video games, characters can be classified according to three attributes. Usually, the three can be White Magic, Black Magic and no magic; but if there is no distinction between white and black magic, then it's more useful to classify the characters by Strength, Dexterity and Magic. The latter is the case of Final Fantasy 7. 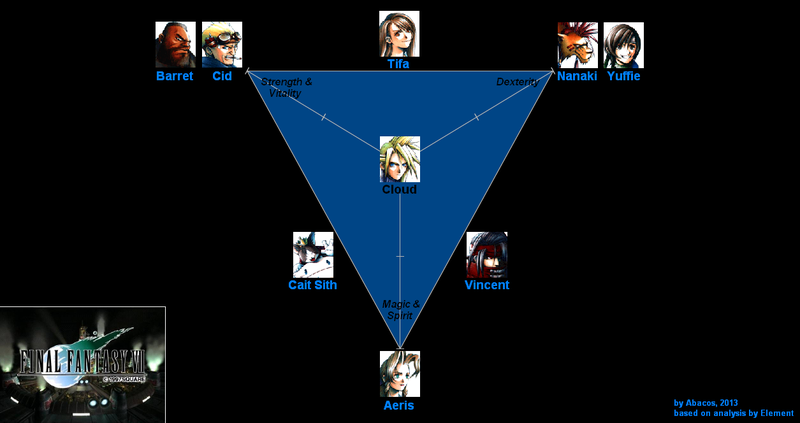 The blood type of each character in Final Fantasy 7 is known, but apparently it has no relevance on the game. In fact, in Japanese culture each blood type is associated to some personality traits[2].

Note that the blood type of Red XIII and Cait Sith are not available because they are not human being.