Time to get out, but just as you enter the elevator on the 66th floor, Rude stops you. After a cutscene, you find yourself in prison. Kill time until you go to sleep. When you wake up, you find out that all hell has broken loose. Jenova is missing from the containment tank, and a trail of blood leads upstairs. As you follow the trail, pick up 2 potions and save your progress at this point. At the end of the trail, President Shin-Ra has been impaled with a Masamune sword in his back and Palmer is spooked because he witnessed Sephiroth kill the President.

Head outside where Rufus is waiting. He'll taunt to you, and you get time to set up for the two upcoming battles, at which point your party splits up.

The first battle is done by Aeris, Barret and Red XIII. You get to remove Cloud's and Tifa's materia first. Re-equip with some Lightning materia and Restore as well. You definitely need to have good spells on both Red XIII and Aeris.

Enter the elevator, and the battles start. The following two bosses will be fought immediately after each other, so you don't get any chance to rest or change equipment between them.

Pound Hundred Gunner with everything you have. The quicker you get rid of him the better, as his attacks get stronger as the fight goes on. This is a long-range fight; physical attacks from anyone besides Barret are thus likely to fail. Equip Barret with the Elemental+Lightning combo in his weapon and use standard attacks. Have Aeris and Red XIII launch spell after spell (it helps to have more than one bolt materia). Red XIII's limit breaks are long-range attacks, so take advantage of them as well.

This boss has less HP, but does more damage and attacks more often. Use same strategy as you did for Hundred Gunner, just watch your hit points.

You get to mess with Cloud's materia and equipment at this point too. Rufus and Cloud talk for a while, and then the fight begins. 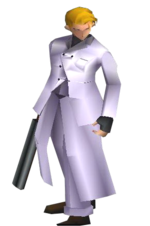 Rufus is accompanied by a creature known as Dark Nation (Level 18, HP 140, MP 80), who will spend its first four turns putting up a fortress around Rufus and itself before redirecting its attention to you.

A good strategy is to use magic (e.g. bolt) right away to kill the Dark Nation. It should only take 2 hits. He will cast Barrier on Rufus, then himself before repeating the process with MBarrier. By killing it before it has a chance to use MBarrier, Rufus is left open to magic attacks. It should take 4-5 hits to finish him this way versus 9-10 if you let him get the MBarrier (depending on your level, of course.) Regardless, if you also have a restore equipped, he shouldn't be a problem at all.

Now, head downstairs. You can save at the save point - just remember to do it before you talk to Tifa.

Note
This is the only chance to rearrange your party for the coming boss fight and get the materia set up correctly.

Now it's the time to show some surprising thinking. The crew gets in a car, Cloud gets a motorcycle. After you figure out the instructions and take time to organize your party, equipment and Materia, it's time to protect the car from the bad guys.

If you are playing on PC, the following subgame can be pretty difficult to play on computers with lots of processor and graphics card power, as it has no frame limiter. In other words, it will run as fast as your computer can handle unless you patch the game. Also, on 4 July 2013 a new PC version was released on Steam which will not have this issue.

There's really not that much to this game - you can ram the bikes against the railings, or slash them with your sword. Either way, get rid of them before they damage the passengers or Cloud too much. Eventually, you end up getting tailed by something really big. Beat him and you're finally out of Midgar.

The only hard thing about the fight is that the motorcyclists might have managed to inflict some damage on the party members. Another thing is that this fight starts as a back attack - tap

(9 or Page up) (3 or Page down) to momentarily run away as soon as the fight starts to make your party face the right way. Apart of that, hammering the thing with Bolts should work wonders. The boss is fairly easy, the only thing to watch out for is its "Rolling Fire," which can take a nice chunk out of the entire party.

Go to top
← Shinra Headquarters | Flight from Midgar | Mithril Mine →