Technically, Final Fantasy VII is not a perfect game. There are few odd glitches that can be found. The game also has flaws in story, cutscene videos and graphics. There are also "debatable" flaws in the story.

When you return the huge materia to Bugenhaagen, Cloud is told to get the others. He then picks up his phone and calls the rest of the party, but the phone rings, even though he is using it to make the call. However, this may not be a glitch and could have been a decision made by the designers, as this sound could also be the ringing heard while Cloud waits for the party to pick up the phone on their end.

If you are using Regen, open the disc tray and use a spell. The game will stop and the only thing that will happen is your health will go up. This is useful in the Weapon fights. To un-freeze, simply close the disc and resume play.

This glitch can be seen in the Windows version, in the cave near Cosmo Canyon after defeating Ultimate Weapon. When failing and restarting many times from the beginning using SWITCH, you will eventually see what looks like a giant green chocobo in the first screen jumping up and down. Cloud is still visible above the graphic walking on the path which is impossible to see.

The W-Item materia has a flaw. During a battle, choose to use an item you want to duplicate and pick a target. Then choose another item (the same one or another one), but don't confirm a target. Cancel it, and the first item's count increases by 1. Do this over and over to easily get 99 of any item you can use in battle - megalixirs, greens, etc. Most players think you must choose the same item for this bug to work, but that is not true, making it possible to increase items you only have one of. It has been confirmed that the W-item bug still has not been corrected in the PSN version. 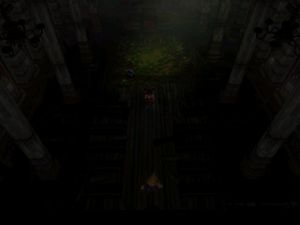 When visiting Aeris' church in the second disc or later, one can spot a "ghost" of Aeris right when entering the room. The ghost will only appear for a split second when visiting the church for the first time.

There is some speculation as to whether this is a glitch or is intentional. It is most likely a glitch, on following grounds:

Well, there are reasons why it's also not a glitch, including:

This glitch is at the end of disk 2, right before going into Midgar to stop Hojo. You have to do pretty much everything you can do to trigger it. I mean everything:

Once you did pretty much everything go back to icicle inn and go to where you got the glacier map. That little cat lying on his back next to the sweet old lady will now be a large monster which is popping out of the house walls. It doesn't even look like a cat at first.

If you walk into a spider web immediately after fighting a random encounter it is possible to have the ambient music play while fighting instead of the battle music. This has only been confirmed in re-release of pc version. Also confirmed to work on Final Fantasy 7 American version, running original or greatest hits version, on a ps1original, ps1compact, ps2original, ps2slim. 09/01/2015. Can be performed on all spider webs if timed correctly.

(only tested in PSX version may exist in others) Anytime the game automatically places materia into your inventory like during some forced party changes if your materia inventory is too full you will lose any that do not fit for good.

Barret Softlock on the Cargo Ship[edit]

When on the cargo ship after the first visit to Junon, be careful talking to Barret who's looking into the cabin. Talking to him when trying to progress the story from the wrong angle, between the railing and Barret's back causes Barret to get stuck between a railing and Cloud, making him run in place forever. (only tested in Switch version, though most likely present in all other versions.)

Only in the Playstation 1 version. This bug prevents the Magic Defense stat of any armor equipped from being added to a character's Spirit stat when calculating the final Magic Defense, effectively making the Magic Defense of all armor useless. This was fixed in the 2012 PC release as well as the iOS, Android, Playstation 4, Xbox One and Nintendo Switch versions.

Note: Most of the translation bugs were fixed in the 1998 PC version.

The game lets you reconfigure the buttons on the PlayStation controller, however there are times when the game designers seem to have forgotten about this and designed the game only to work with the default button map.