Back in Sector 7, you will meet a lot of scared people. Head to the bar — the building on left where Barret is waiting.

Caution
If you send a flower to Marlene and tell Tifa that Barret's snoring kept you up, you may end up dating him if you treat all the other girls horribly.

Inside, you meet Tifa Lockhart for the first time in this game. If you bought flowers from Aeris, you can give them to her or to the little girl, Marlene. Talk to the folks there. If you try to get out, Barret will come in and get the meeting downstairs going. You can ask Tifa to make you a drink if you like.

Downstairs, you'll get to talk more to the AVALANCHE folks and see exactly how cold Cloud is. As you try to get out of the house, Barret will give you your pay, which you spend most of to buy armor, weapons and materia for Barret and the others. You also sign up for the next mission.

In the morning, after greeting Barret and Tifa, who will now accompany you for a while, Barret asks how to use Materia. Choose to explain if you want to see a tutorial on the Materia system. You can now use the Materia menu to arrange your stuff.

Outside, there are a few places to visit. You can talk to people, and visit houses. You also have some money to spare now, so you can visit the weapon shop and the materia shop. Pick up as much Materia as you think is necessary, but don't buy too much, as you will find most of the useful materia later on. You might also want some protective stuff like Iron Bangles, Potions, and maybe even an extra Phoenix Down.

Barret hinted that the weapons store guy knows something. Talk to the guy behind the fence and he sends you upstairs. Beginner's Hall has a cute dog, and a lot of helpful tutorials to get you familiar with all of the basic aspects of the game. There's also a Save Point there. Here, you can also pick up a free All materia, which you should equip immediately. Pair it with Restore so you can heal your entire party.

Once you're done, head up and to the right from the town the way you came in, and head back to the train station. The train is waiting, so hop aboard. Inside, talk to folks again. Tifa wants to show you the security monitor again, but something goes wrong, and the security lockdown starts. You now have 15 seconds to head out of each car — just follow where the rest of the group are running again. Although you will have to move very fast, if you quickly speak to the man in the back right corner of the first car, you will receive a Phoenix Down. Next, in the second train car, speak to the man just before the exit on the left to receive a Hi Potion. In the next car, you will be pick-pocketed, but if you catch up to him and speak to him, choose "That's Right" as an option, and you will recover your stolen goods. Eventually you'll reach the last car, talk to Tifa two times, and you will get to jump out of the train. (Please Note: If you jumped off the train before talking to Tifa, her 'affinity' towards you will lower (less chance to date her on date night) and you simply have further to run in the next section than if you made it through all the train cars).

Once you have jumped off the train, you are in what appears to be an underground tunnel. If you move towards the top of your screen you are heading towards your goal. Traveling towards the bottom (away from your goal) takes you eventually to a pair of Shinra guards. If you continue towards the Shinra guards after it warns you, they will attack you. This battle, a set of 3 Shinra guards, gives you a good deal of Gil and AP at this level and is a fairly easy fight. Afterward it will give you the chance to run away, or continue fighting another set.

To continue towards your goal, head towards the top of the screen until you reach a security gate. Examine the air conditioning duct on the left and head down. What follows is a simple maze-like portion. You don't have people running ahead of you to guide you, but whatever route you take, you'll finally end up to the crawl-way leading to the reactor and a save point. Along the way, you'll meet Jessie and Wedge, and at least find an Ether, Potion and a Tent, which is right beside the save point.

Once you get to the duct and emerge on the reactor side, you've got to slide to get down. Reactor no. 5's inner building is exactly same as the no. 1 Reactor, so this should be familiar territory. Head to the reactor core room again, plant the bomb, and Cloud gets another flashback, although there isn't a boss fight here. To get out, head back the same way you exited the first reactor, and go up the elevator.

The security room is different in this reactor. Tifa and Barret go to the other side of the table. Try to hit the button at the exact same moment as the others. It doesn't need to be exactly at the same time, just close enough. Head out, and there's a save point on the other side of the room. Save here, because you won't be getting to another save point until after the upcoming boss fight. 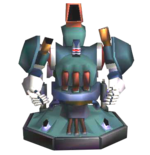 This is the first boss fight that might give you a challenge, but you aren't in any real danger if you just remember to heal up if you're taking serious damage. The fight is unusual in that Tifa and Barret are on one side and Cloud on the other. Take advantage of this fact if you can, by alternating attacks so Air Buster's back is to the attacker. This tactic is especially effective with Limit Breaks; someone on one side draws its attention first, then a party member on the opposite side attacks it with a Limit Break. Keep hacking and Bolting the thing, as you heal up from its retaliations and cannons. Before you know, the big robot stops turning, so it can't retaliate on the other side any more. Just when you start preparing for the worst, the boss gets a short circuit or some other malfunction and explodes.

With the explosion, the bridge breaks and Cloud falls into a dream sequence after a short struggle.