The train graveyard is easier than it looks. The only thing that probably confuses you at first is that the train cars have holes on their roofs, so figuring out where the items are located is somewhat difficult. Give Tifa the Steal materia since her DEX rating is higher than Cloud's or Aeris'. On the second screen, you can steal Ethers from Deenglows (the green flying creatures) and be sure to steal the Striking Staff from Eligor, who looks kind of like a cross of Baraka from Mortal Kombat and a Centaur (a half man half chariot). The Striking Staff will not be sold in stores for a very long time, until you get to Junon.

Use the ladders and ramps to cross to the other side. There's a Hi-Potion and Ether, also check the oil drum for an item. On the other end of the train graveyard, the trains block your path. Hop on the nearest engine that has a door open. The engine car will push one of the cars out of the way. Then hop onto the other engine car, and the way clears and head left of the screen. Speak to the passenger if you so desire, and continue to run westward.

The fall of Sector 7[edit]

The column is still standing! Regrettably, Wedge isn't, as he just fell down. Nor are Biggs and Jessie in much better condition a bit further up. Aeris scurries off to get Marlene from Tifa's bar but not before kneeling before Wedge. You can buy items from the grey haired merchant here standing behind a structure of sorts in front of the column area, and save. Not to worry, the merchant will move to the gate to sell items if you walk into the gated area as the gate will close after you enter. Keep in mind that the Iron Bangles are lost forever from now on. Afterwards, run up the long staircase and fend off mobs.

Once you reach the top, Barret says that the enemies are coming by air and lets you get your Materia and equipment sorted out before they get closer. Get Barret and your party equipped, and then Reno shows up and calmly sets the bomb off. In the middle of the fight, Reno will rush off and Barret will perform a last-minute escape. 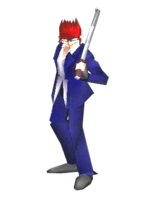 The red-tailed Turk is one of the recurring bosses, so don't think this will end here. Bolt only does half damage, but other elemental spells are pretty good. Reno has a really annoying attack called Pyramid, which shields one of your characters in a gold pyramid. While a character is in the pyramid, they are considered knocked out, and if all three characters get enclosed, it's game over. To remove the pyramid, simply attack the character affected, and the pyramid will go away; you may want to hit

- to show the target names, and make sure you are targeting "Pyramid A" (or B or C) instead of your characters. Reno's low HP makes this a relatively quick battle.