The game begins with Squall lying at the Infirmary after the incident with Seifer. After a short conversation Dr. Kadowaki will phone Squall's instructor, Quistis Trepe (and a mysterious girl makes a brief appearance). 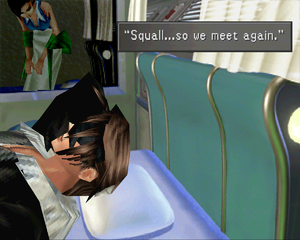 Just follow Quistis while she is talking with Squall.

In the classroom Quistis will call you. Before talking to her examine your computer on your seat.

Talk with Quistis. She will tell you to meet her at the front gate. Leave the classroom and walk south. Squall will collide with a girl, Selphie. She will ask you if you can show her around; if you want to get a quick tour of the school then say yes, but if you don't want to it won't affect the game. If it's your first time playing then it's worth doing as it will help you get acquainted with the layout of the school. 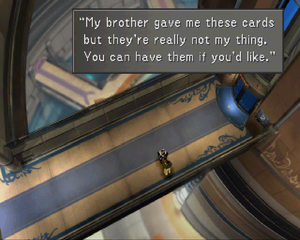 Beginning deck
Continue walking right and talk with the man here. He'll give seven level one cards (Caterchipillar, Fastitocalon-F, Funguar, Gayla, Geezard, Gesper, and Red Bat) to you. You can use these cards to challenge other people to a game of Triple Triad. Unfortunately, these cards make up a very weak deck so it's worth waiting until you have a stronger card or two.

Enter the elevator to descend to the first floor. If you chose to help Selphie you will have a quick explanation about Balamb Garden.

Once you are free you can take the time to explore the school a little bit. You should head to the Library (if you need to know where that is, use the Directory map). After you've arrived there, head right until you reach a set of book cases facing you, then turn left and move forward. Once the scene changes, examine the right most book case for an Occult Fan I magazine. 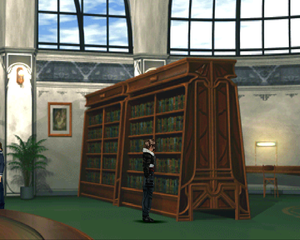 You can also go to the Cafeteria where you will run into Seifer and his posse, plus catch a quick glimpse of Zell trying to get some hotdogs. The Training Center is a good place to get some early experience for yourself and your GFs, but be careful not to run into the T-Rexaur monster as you don't stand a chance fighting it by yourself.

Once you've had enough of exploring, head out the Front Gate to meet Instructor Quistis.