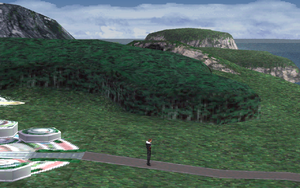 Exit Balamb Garden and turn to Squall's left. Go through the forest (be wary of T-Rexaur) and to the Fire Cavern. If you haven't already done so, junction Shiva to Quistis and select Magic, Draw, and Item as abilities. Don't forget to select your GF's abilities!

You are asked to choose a time limit, which is the amount of time between entering the cavern, and finishing capturing Ifrit by exiting its naming screen. When you are asked to choose a time limit choose "10 min." as this gives enough time to follow the staright-line path towards Ifrit and defeat him using physical attacks. Players that wish to choose a higher time limit can use the extra time to harvest spells from some monsters, but it may be safer to instead harvest enemies in the overworld or after Ifrit. The best result is defeating Ifrit as close as possible to the time limit, but going over results in a game over.

On the third screen, there are paths to the side. The one on the right has a fire draw point you may draw if you wish.

Make note of the time you defeat Ifrit, and stay on the naming screen for the remainder of that time to max your points for the SeeD report. The best score is obtained with 7 seconds or fewer on the clock.

On the Steam version, running out the timer results in no points although you will still win.

Ifrit is one of the easiest bosses in the game. His draw list includes Fire, Cure, and Scan. Just keep hitting him with physical attacks and he should go down quite easily. For an added bonus, use Shiva on him and you will get extra dialogue from him.

When Ifrit has 530 hit points or fewer, he announces "Hm! Not bad for a human." This is about equal to two Shiva casts and supporting physical attacks.

Exit the Fire Cavern and head back to Balamb Garden.