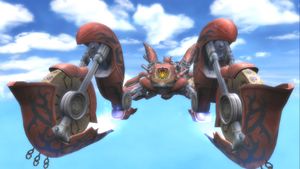 Upon boarding the Celsius, talk to Rikku and Paine for some backstory. Then head to the front of the ship to talk to Brother for three Al Bhed Primers and a brief explanation on what Al Bhed is and how to learn it. If you are playing the international or PS3 version, he will also hand you the Festivalist Dressphere. Talk to the pilot, Buddy, for another Al Bhed Primer.

Next head over to Shinra. He's the little guy to the right typing at a computer. He can be extremely useful, as he is the keeper of all information. He is able to provide dossiers on almost all characters you have met and a bestiary. (If you are playing the international version, he is who you talk to for the Creature Creator side quest). He is also keeper of all the treasure spheres the girls will collect on their journey. You can currently view the sphere "Journey's Start" to learn why Yuna has embarked on her current quest. While navigating through his computer, select "Shinra's Guide to Everything" then "Using Garment Grids". Complete this tutorial to receive the Vanguard Garment Grid.

Now head up the stairs at the back of the Bridge toward the Save Sphere through the door. Save if you wish, and then go to the lift and choose to go to the Engine Room. Open the four chests found here for Phoenix Down x4, Ether, Remedy x3, and Potion x4. Return to the lift.

Now travel to the Cabin. Speak to Barkeep, the Hypello, at the bar. He has basic items for sale. Buy items from him if you wish, and then choose to "Rest". Note that resting at least once in the Cabin during each chapter will unlock a few scenes in Chapter 5.