After entering the Thunder Plains the girls will be informed that a monster is scaring away crowds and needs to be dealt with. It it currently hiding in a cave. Before you rush off to fight this beast, many chests with items can be collected just by traveling down the Thunder Plains. In the first section you can find an Echo Screen x6 on the left side just after the 1st Lightning Tower, an X-Potion next to the 2nd Lightning Tower, and a Glass Buckle near the entrance to the second section of the plains. A Phoenix Down x4 can be found right after entering the second section with a Petrify Grenade x2 not far from it to the north. A Turbo Ether can be found right before the 9th tower. Head to the cave once you have found all these items and prepared for battle. The Hypello in front of the cave can heal you.

to jump up and across the gap to a upper level. Turn to the north path and walk a short distance forward. At the ledge, turn to the right and walk to the end of the upper level, all the while being careful not to fall off. Here you should find a chest with Phoenix Down x2. Return to the ledge and jump down. Head north until the next intersection. Take the east path, then up some ledges to a small alcove with a Elixir. Head back to the intersection and across another gap to confront the Zalamander.

The Zalamander generates a constant Null Magic effect so spells will not work against the fiend. It is best to use strong physical attacks against him. Dresspheres such as Dark Knight, Gunner, Samurai, and Berserker work well. The Zalamander is weak against darkness (not the Dark Knight ability, but the Songstress ability) so use this to your advantage against the Zalamander's physical attacks. Also, Zalamander casts Flame Breath from time to time so have fire resistant accessories equipped beforehand or prepare to heal with a White Mage after he uses that attack. 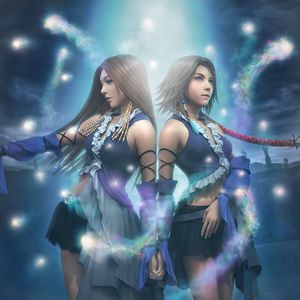 After defeating the Zalamander, collect the chest he was guarding for a Black Ring and exit the cave. The party will get back on the Airship and after a scene, talk to Tobil and tell him you are ready for the concert. Yuna will perform a heartfelt concert in another scene and then the party will return to the Cabin in the Airship. Go to the Bridge to speak with Maechen. Listen to what he has to say and then Buddy will report that the Leblanc Syndicate are waiting the the Engine Room. Talk to them there and they will hand over the Crimson Record 5. Go back to the Bridge and talk to Shinra to initiate another scene. Then the next chapter will begin.