Take Back the Garment Grid![edit]

As soon as the opening full motion video ends, the first battle will begin. 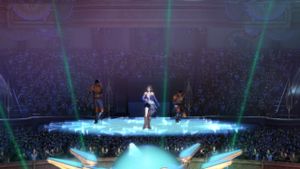 Begin by using Rikku to Steal from each member of the enemy party. She can take Budget Grenades from the Goons and Hi-Potions from ????. (These can be useful for this battle and the next boss battle). There different ways you can defeat them:

1) Using a Budget Grenade in this battle will nearly kill all the Goons and cause heavy damage to ????.

3) Have Paine use her use Power Break which can be found in the Swordplay sub-menu.

If Rikku and/or Paine's HP gets too low, use a Potion to heal them.

while standing next to the large cowering Moogle hidden next to some crates. She will heal you and unlock a later scene, which contribute to your overall percentage completion.

When you reach Dock 3, you will be confronted by again by ???? but this time she is accompanied by Logos and Ormi. The fight is rather easy, have Rikku attack and use items, Paine attack and use Power Break, and Yuna use attack or trigger happy.

The same techniques listed above can be used to take out ????. Focus on her first then steal from Logos and Ormi for a chance to gain some accessories. Logos's gun attacks quickly cause a lot of damage plus he will use potions to heal the party so focus on taking him out next. Ormi's shield attacks are heavier but slower so you will be able to get in more attacks as he prepares. Once he is alone, Chain attack to take him out quickly.

After Logos and Ormi have been defeated, ???? will reveal herself to be Leblanc and initiate yet another battle. This battle serves as the tutorial for dressphere changes. (these are done by pressing

. Have Yuna change into her songstress dressphere and then use Darkness Dance to cast blind on Leblanc. Leblanc's accuracy is now reduced and most her attacks will miss. Rikku and Paine can also now change their dresspheres, but it is not necessary. Have Rikku steal items and use Paine's Power Break. Chain attacks to do max damage.

After the battle is over, you will find yourself on the Airship Celsius.