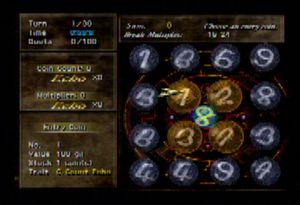 The Sphere Break minigame is a bit like Sudoku, as the game has a numerical grid that has to be dealt with using a set of rules. The mechanics of the minigame are purely mathematical, relying on sums and multiplications; the aim is to create the most multiples of a "core number" by combining numbers of the 16 coins on the board. 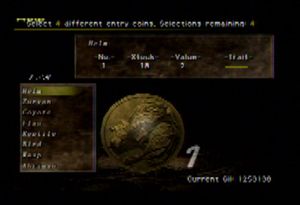 Coins are numbered from 1–9 and possess several different attributes that can help you in the main game or in the Sphere Break minigame itself (free magic item, free potions, echo, more coins, quota multipliers, etc.).

A Core Break happens when you select coins that, added to each other, form a sum that is a multiple of the number rolled by the Core Sphere. You have to obtain a Core Break in a set limit of time or you lose the game. A Core Break ends a turn in the game.

By using the multipliers and other coin attributes, you can beat dealers with very difficult Core Spheres. The current champion Shinra has a quota of 100 coins that have to be obtained in just 15 turns with a time limit per turn of 45 seconds.

A very easy game with low quota, lots of turns and large time limit per turn.

In your first turn, you need to find a multiple of 7 by adding the center coins (1, 2, 3, and 5 with multiplier echo) and the 0–12 border coins (randomly set). Here you could just use center coins (2+5), but this is not to your advantage because center coins do not add any coins to the quota of 30 coins you have to use before your 20 turns are complete. You have to pick one center coin, for instance 2, bringing the sum to 2.

If you pick three border coins: 8, 8 and 3, making your total sum 21 (2+8+8+3), you'll obtain a successful turn, i.e. a Sphere Break. Your quota is now equal to three coins and your multiplier is 3, because you closed the turn with 21 which is 3×7. The multiplier is important, because one of your center coins has the multiplier echo attribute and will help augment your quota in the next turn.

On the second turn, the Core Sphere rolls a 1, which is good for the dealer and bad for you.

Faced with a 1 from the Core Sphere, you are forced to pick only center coins, as any number you pick will be a multiple of 1 and you have to start by picking a center coin. This means you will not get any extra coins to add to your quota this turn.

As noted above, any center coin (1 ,2, 3 or 5) will end the turn. To be clever, you would use the multiplier echo to your advantage here and pick the 3 center coin. This will make your multiplier for his second turn to be equal 3, which is what 3×1 amounts to. Note that the turn ends with the same multiplier as the last turn: 3. This means you have a multiplier echo.

The turn ends with a quota of 3 (no border coins were added) and a multiplier echo of 1.

For the third turn, the Core Sphere rolls a 2.

You want to pick your mandatory center coin to be odd, because any coin that is even will end your turn. For instance, you might pick 1.

The turn ends with a quota of 4 plus the echo bonus of 2 multiplied by your quota on this turn, which is 2×1, giving you a total quota of 6 and a new multiplier echo of 2.

The game proceeds until either all 20 turns are completed or the quota of 30 coins is fulfilled. If you fulfill your quota before the end of 20 turns, you win the game and all the prizes yielded by the border coin attributes.