This expansion introduced the following:

Mog Lockers are one of the special “benefits” of being an employee of the mercenary company Salaheem’s Sentinels.

This private locker is initially provided free of charge, and its contents are managed by a familiar moogle-based system. Paying an expansion fee will grant you access to additional space for storing items.

Although the Mog Locker is initially free, using this service even once will require you to keep up periodic “lease” payments in order to retain access to your stored items. A convenient system for overburdened adventurers but in the words of President Naja Salaheem, “A coin paid out from the company coffers will find its way back eventually.”

Some people in Vana'diel make their living as Appraisers, helping merchants and mercenaries determine the type of items they have picked up during their travels in Aht Urhgan. The Near East's powerful ocean winds, rust, or even mere age can make an item unrecognizable to the amateur eye. The finder may even simply lack the knowledge to make an accurate judgment and find himself unsure of how to use the newly discovered good. In such cases, appraisers use their experience and keen senses to ascertain what the item really is. Qiqirn can use their keen noses to sniff out information about an item, and many make excellent appraisers. The only drawback to using a Qiqirn appraiser is that they might be a little difficult to understand due to their odd accents... 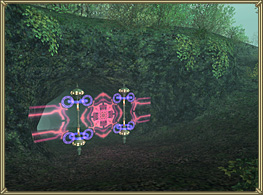 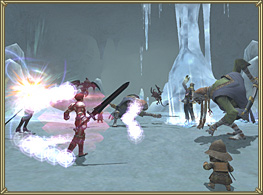 "Assault" means to make a sudden attack on a fortified area. Your goal in Assault is to fight through an enemy stronghold with a small, elite unit of mercenaries.

In order to participate, you must first go to the Commissions Agency, where you can view a list of available tasks. Choose any task that interests you, and gather the number of people necessary to finish the operation. Then, enter the enemy's stronghold and complete your tasks.

If you manage to complete the Assault and make it back alive, the Empire of Aht Urhgan will reward you with fame and an appropriate reward.

Assault can only be undertaken by small, select groups. In exchange, the Imperial Army will evacuate any non-participants so that you can fully concentrate on the operation. On the other hand, no one will be around to help if you find yourself in trouble, so you must always be on guard. 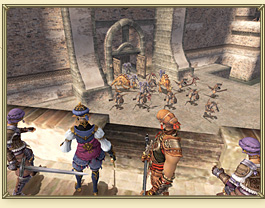 “Besieged” is a form of defensive battle that takes place when enemy forces breach the gates of Al Zahbi. The Imperial army declares martial law, and the city is enveloped in conflict.

After martial law is declared, anyone in the area who can use a weapon is required to join the Imperial Army in combat and take charge of Al Zahbi's defense. However, repeated beastman attacks have nearly destroyed the city's fortifications, transforming the majority of these defensive battles into aggressive clashes on the streets themselves.

Al Zahbi's enemies are after one thing--the “Astral Candescence” located in the Hall of Binding. The fate of Aht Urhgan and the beastmen ride on this single item, which allegedly draws upon the infinite energy of the Astral Plane.

Five “Serpent Generals” hold the keys to the Hall of Binding. They must be protected at all costs while driving the beastmen from the city. The safety of the townspeople and the future of Al Zahbi rest in the hands of the adventurers!

Square Enix has stated that the Merit Point system will be altered or improved with (or at the time of) this expansion's release.