The chapter will start with a cutscene of Lightning and Sazh escaping a Pulse train. PSICOM security sends out Manasvin Warmech to stop the two. 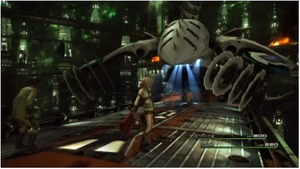 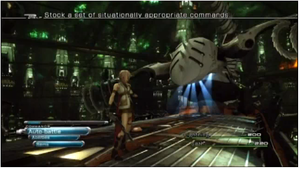 For now, you'll have three options: Auto-Battle, Abilities, and Items. Put together commands for your party to use before the time segment is up. 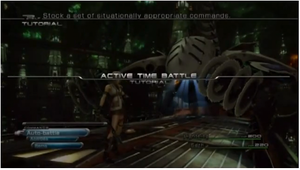 A short tutorial will be played about the basics of combat. 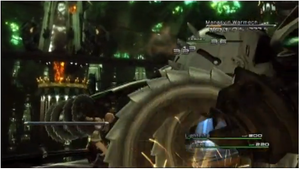 Keep using Auto-Battle. When it comes back after its supposed defeat, it'll be a little tougher, but still no reason to use a potion.

Before you can start, you'll be asked if you want to change the camera control scheme and be told about the datalog, which can be accessed through the main menu. You'll see a

Enemies. This is where you'll be told about enemy encounters. There will be two PSICOM Enforcers patrolling the area. You can either avoid the battle or fight.

After passing the enemies, step on a small blue circle to make Lightning jump over a pile of debris. Up ahead will be a group of two more PSICOM Enforcers and then three. After either defeating the enemies or getting away from them, you'll see a floating sphere up ahead. This is an item container. Open it to be given a potion. After another cutscene, you'll be introduced to a different type of enemy: Pantherons. They'll be harder to avoid because of their speed and size. After defeating both Pantherons and the PSICOM Enforcer, go up the staircase on the right to see another item container. Open it to obtain two potions.

Go back down the stairs to see another Save Point. Jump over the boxes to be introduced to another enemy, a PSICOM Aerial Recon, paired with another PSICOM Enforcer. After you're done with them, walk up a staircase on the left to retrieve an Iron Bangle from an item container. After following the path up another staircase and then jumping over the rail, turn back to see another item container containing 50 gil. Turn back around and follow the main path. You should then see a group of three PSICOM Wardens. Keep going straight ahead to face a mandatory battle following a short cutscene. A tutorial will be shown about item usage. Here you'll be facing a Pantheron and PSICOM Warden. After the battle, keep moving forward. An explosion will trigger a cutscene.

After Sazh points out an available path in the cutscene, he'll start to lead the way toward it. Three Pantherons and a PSICOM Warden will be in your way. After taking care of them, head to the staircase on the left, where you'll see a Save Point and a blue circle. Step on it to activate the jump and access the switch on the circular platform below. It'll start to move, bringing you to your next boss. 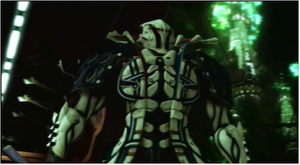 The PSICOM Marauder, flanked by two PSICOM Enforcers, is a mini-boss. 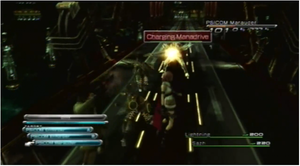 When he's charging his manadrive, he'll be free to attack. 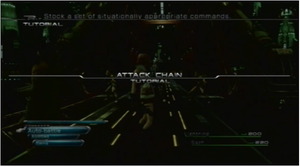 A tutorial will play showing you the basics and importance of attack chains. 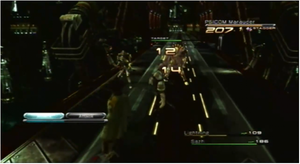 Activate stagger and his health will go down much quicker.

After the mini-boss, a cutscene will bring you to a different point of view. Snow Villiers and his best friends, members of their Sanctum resistance group Team NORA, are fighting off PSICOM soldiers as well.

Here you control Snow, who fights with two party members, his loyal friends Gadot and Lebreau. From where you start, turn around to see an item container containing 50 gil. Walk by the refugees to get what they're saying. There should be a

Save Point not too far away. After jumping over some debris, a cutscene should ensue. With your party members, you'll be fighting three 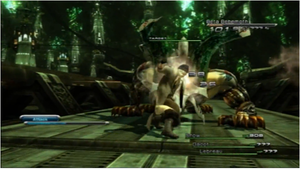 Beta Behemoth is the second boss of the chapter and the first you face as Snow. 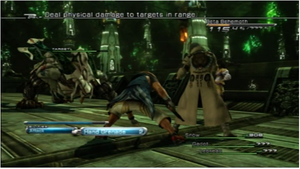 Because of the strength of Beta Behemoth, it's best to use a hand grenade instead of getting close. 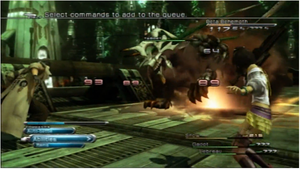 Beta Behemoth can prove to be a bit of a challenge due to its strength. 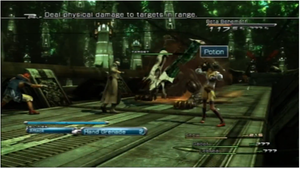 When you're running low on health, instead of using potions, Lebreau will usually be there to heal you.

Following the cutscene after Beta Behemoth, you're brought back to Lightning and Sazh. After a cutscene, you face a battle with Myrmidon. 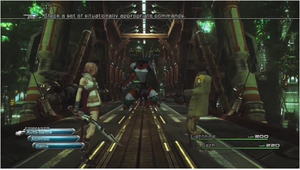 Myrmidon is one of the mini-bosses of the chapter. 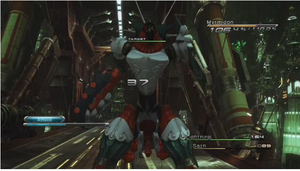 Try to distract it by attacking while it's focused on taking down Sazh. 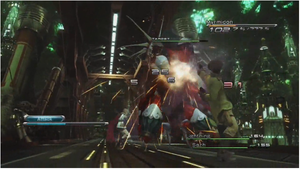 It attacks quickly and inflicts a lot of damage. 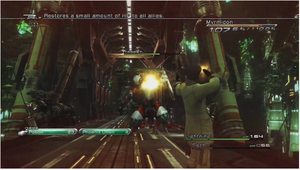 Remember to use a Potion or Phoenix Down when necessary.

After a cutscene transitioning between characters, you're back to Snow with Gadot as your party member. Walk a little up ahead to find an item container with a Power Circle. Turn left for a Save Point, and go forward to fight a group of three PSICOM Aerial Recons and two Pantherons. After the enemies is a path leading up and then down a staircase. Turn around to see an item container containing 100 gil, and walk up the next set of stairs to follow the main path. After the last set of stairs, a cutscene will follow where Gadot kills many of the PSICOM Enforcers in their way by surprise-fire, and you're left to battle the remaining three. Examine the enemy vehicle ahead to activate a cutscene.

Here you play as Hope with party member Vanille. A Save Point should be right next to you. Go forward and examine the enemy vehicle Gadot used in the race with Snow to activate a cutscene that ends the chapter.