After a cutscene, you'll battle a Pantheron with Vanille and party member Hope. Before going up the stairs, go backwards for an item container containing 30 gil. You will then be told about preemptive strikes. Certain enemies, like the Zwerg Scandroid, have narrow fields of vision, allowing for an easy preemptive strike. A group of three Zerg Scandroids guarding an Iron Bangle will be in front of you for practice. Two Pantherons will also be ahead. Following those will be a cutscene, which will bring you to Snow's point of view.

The path here is very straight-forward. After defeating two Pantherons, activate a switch. After a cutscene, you'll be brought back to Lightning and Sazh, who have also gotten into the Pulse Vestige.

Before you play, you'll be told about shrouds. To the right is a Save Point and three Pantherons will be running down the stairs. After defeating them, walk up the stairs to see three groups of enemies: four Zwerg Scandroids on the left, two Pantherons in the middle, and three Zwerg Scandroids on the right. After following the main path and encountering two more groups of enemies (a Myrmidon and Pantheron/Myrmidon group) there will be a cutscene.

Now you'll be back to Snow. Go backwards for two potions. Ahead will be the switch, guarded by two Zwerg Scandroids and a Pantheron. After activating the switch, move forward to the lowered platform for a cutscene.

You'll be brought back to Vanille and Hope during the cutscene. Two Zwerg Scandroids should be right in front of you from your starting point. Go up the stairs to find another battle of four Zwerg Scandroids guarding a shroud, Fortisol. Afterward, go right up another staircase, where there will be two Pantherons guarding a narrow path. After getting past them, you should see a Save Point to your right and two Pantherons guarding 100 gil to the left. Move forward for a cutscene introducing new enemies, Cie'th, l'Cie that haven't completed their focus. Snow will then come along, making a three-member party. Controlling Snow as the party leader, defeat three Ghouls for the next cutscene, which will bring you back to Lightning and Sazh.

To the left will be two Ghouls guarding a Power Wristband. Back to the main path will be a Ghoul and a Wight. Afterward will be four Ghouls, and then two Ghouls and a Ghast. Behind the Ghast will be a Save Point leading to another path. Following five battles of single Ghouls will be a battle of two Ghasts. After facing them, the platform will rise. Go up the stairs to activate a cutscene. Up ahead will be a Ghast, and after that a Ghoul and a Wight. The last enemies will be a Ghast and a Wight guarding five potions, with a Save Point to the right. Go through the opening to face a cutscene following up to the boss of the chapter. 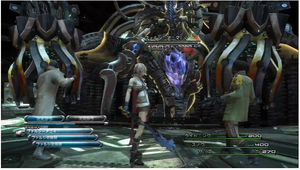 You'll be facing the Fal'Cie with Lightning, Snow, and Sazh. 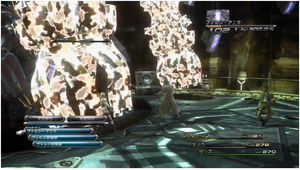 The Manipulators will keep regenerating, no matter how many times you destroy them. 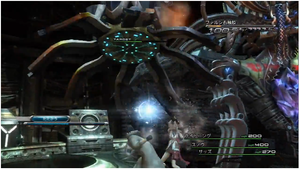 The Manipulators will be extra targets. They don't have much HP, so they're easier to destroy. 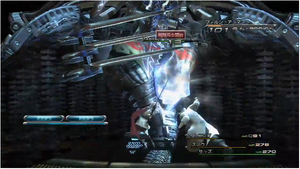 Focus on the Anima, as it's the only way to end the fight.

After the fight, you'll be taken to the next chapter.