After the cutscene, you'll have to battle three Ghasts with a party of Lightning, Snow, and Vanille. Before the battle can start, you'll be given the option to view a Paradigm tutorial. View it or skip it and defeat the Ghasts. After the battle, another cutscene shows the party noticing their new l'Cie brands. After the cutscene, you'll have control over Lightning in a party with Vanille and Snow.

Walk along the path to find Vanille and Hope, leading into another cutscene where the party discusses their Focus. After the cutscene, you'll be given a mandatory Crystarium tutorial. Continue to walk along the path afterward with the same party of Lightning, Snow, and Vanille. Go down the left path to see groups of Ghouls and Ghasts. Take the Pearlwing Staff from the item container at the end of the path and then turn around and take the path on the right. The first enemies you'll see are a Ghast and three Wights. After battling them, continue toward the gap and step on the blue circle to jump from debris to debris. When you get to the other end, you'll come across a cutscene.

After a small discussion between the l'Cie, PSICOM forces come to attack. Before the battle can start, you'll be given the option to view another tutorial on command execution. View it or skip it and defeat the PSICOM Wardens. After another cutscene, go to your party members and battle a group of three Ghasts and three Wights. Open the item container they were blocking for five Cie'th Tears. Go down the other path until you come across another battle with a group of Breshan Bass. Go down the path on the left first to face off against another group of Breshan Bass. Defeat them to be able to open an item container holding a Silver Bangle. Turn back and go to the path on the right, where you'll see a Save Point.

Continue down this path until you reach another short cutscene. Keep walking for a battle with four Pantherons. Open the item container for Phoenix Down. Then go down the other path for a battle with two more Pantherons. Another item container can be found here containing Strange Fluid. Continue and battle a group of two PSICOM Enforcers and one PSICOM Warden. Open the item container after the battle for a Magician's Mark. Keep walking along the main path to trigger another cutscene. The party finds a crystallized Serah, where tension rises between Lightning and Snow. Suddenly, the party is attacked by Manasvin Warmech. Lightning, Snow, and Vanille battle the machine. 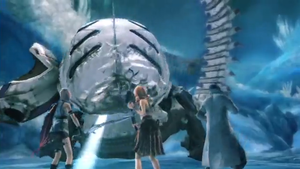 PSICOM once again sends Manasvin Warmech to take care of the trouble. 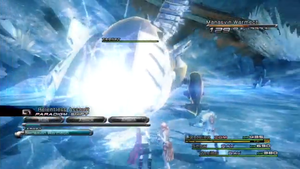 Use the Relentless Assault paradigm (Commando, Ravager, Ravager) to get the Stagger bar up until Warmech uses the Wave Cannon attack. 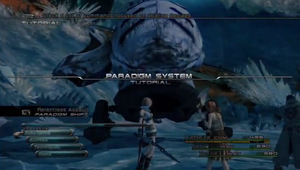 Before the battle can start, you'll get the chance to view another tutorial on Paradigms. 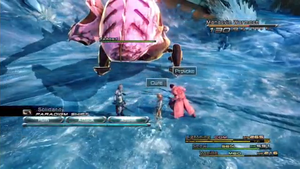 Switch to the Solidarity paradigm (Commando, Sentinel, Medic) to recover from the Wave Cannon. Eventually, you'll be able to go back to Relentless Assault to stagger it.

After another cutscene following the battle, Snow is switched out of the party and replaced by Sazh. Follow the path to reach a group of Breshan Bass. Go right on the next fork for an item container holding Strange Fluid, then go left or jump down from the end of this path to go into battle with four Pantherons. At the next fork, go down the left path for two item containers and then the right. A group of Bloodfang Bass will jump onto the path. Battle them and continue on until you see an airship on the side of the path. Examine it to open a new path, then battle the group of Bloodfang and Breshan Bass to clear the way to the path you opened with the airship. Continue down the path past the Save Point to come across your next boss: the Alpha Behemoth. 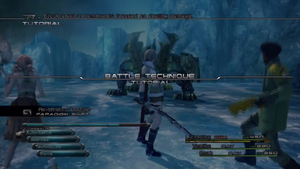 Before the battle can start, you'll be given the option to view another tutorial on Battle Technique. 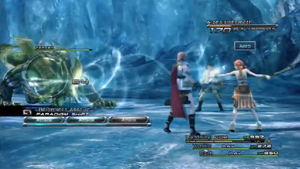 Attack when it's charging. 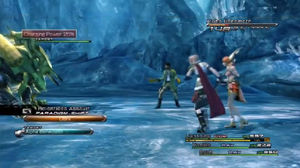 Eventually, Alpha Behemoth will have to charge (this is when "Charging Power" is shown as its current action). 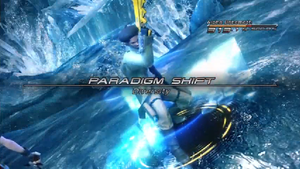 If you have to heal, switch to the Diversity paradigm.

After the battle, follow Sazh down the path and you'll trigger a cutscene. After the cutscene, follow Vanille and you'll find some enemies: two PSICOM Trackers. Battle them, then continue down the path to be introduced to more new enemies: three Watchdrones. Continue and another group of PSICOM soldiers will run up to confront you: a PSICOM Ranger and two PSICOM Trackers. After a lot of jumping up you'll come across a battle with another Watchdrone and a Ciconia Velocycle. Walk a bit more and you'll trigger a cutscene. Afterward, you'll come across three Watchdrones in a tunnel. Keep walking through the tunnels (and open the item containers along the way for 30 gil and five begrimed claws) and you'll reach the Gates of Antiquity.

Save at the save point and when you get into the ruins, take an immediate right for an item container holding 600 gil. An Alpha Behemoth will be right in your path. Try to take a sneak approach (this shouldn't be too hard considering its slow movement) to get a preemptive strike, which should make the battle a bit easier. After defeating the Alpha Behemoth, you'll reach another set of stairs. Instead of taking them, turn to the ruins to the right of them and you should be able to jump on to them to find a hidden item container holding two Digital Circuits. Now turn to the left back on the main path to fight three Watchdrones and a PSICOM Ranger. Jump up onto the ruins to the left where you'll reach another level of the ruins. Instead of jumping down, turn to the right and take the stairs, then turn to the right again to find a hidden area with an item container holding seven Begrimed Claws. 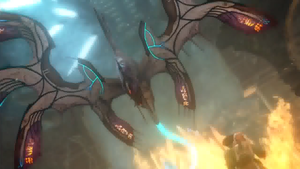 The Garude Interceptor is the first boss you face when you reach the Gates of Antiquity. 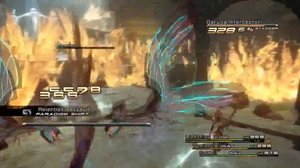 By that point, the battle should be easy to finish. 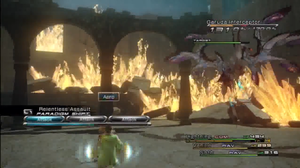 Keep attacking until you get the Stagger bar full while switching to Diversity when you need healing. 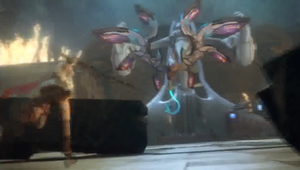 It responds by flying away, leading into a second, harder battle. 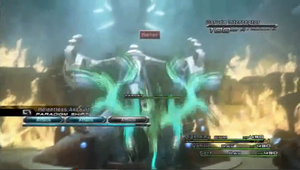 This time, the Garuda Interceptor is capable of forming a barrier. 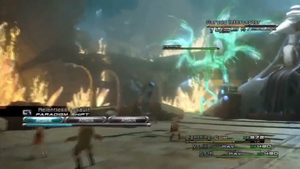 Don't stop attacking until you're able to stagger it. 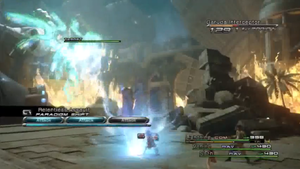 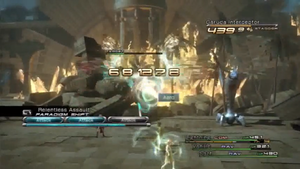 Once it's staggered, you should be able to finish the battle.

When you've finished off the Garuda Interceptor, the point of view will switch back to Snow, who's eventually attacked by PSICOM Trackers. Fight off enough and a cutscene will bring you into the first Eidolon battle of the game. To defeat the Shiva Sisters, as a Sentinel, use Steelguard whenever you see Nix about to attack. Stiria will heal you when you need to be healed, so just focus on Nix and, with enough guarding, the battle will be over. Snow meets some new people after he gains the summon and the point of view will switch back to Lightning, Sazh, Hope, and Vanille. After a long airship chase, Galenth Dysley is introduced to the story through a news report. After another cutscene, the chapter comes to a close.