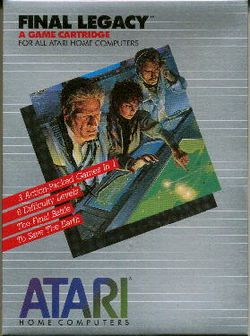 Final Legacy is a shooter game that was developed and published by Atari in 1984. It made its debut as a prototype on the Atari 5200, but was never officially released. It was later published released on the XEGS of the Atari 8-bit family in 1987.

The game is made up of several mini-game like situations where the player must destroy enemy tanks, boats, or missiles by using an aiming reticule from a first-person perspective.