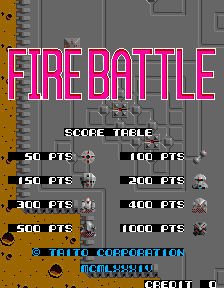 Fire Battle is a vertical scrolling shooter arcade game which had been developed by Woodplace for Taito Corporation, in 1984; it utilizes two Zilog Z80 microprocessors (running up at 3 MHz), with one custom sound chip for audio. It represents the company's response to Namco's Xevious (which was released two years earlier) - and this is reflected by the game's font, which is very similar to the one Namco had designed in 1982. The player must use an 8-way joystick to take control of a spaceship with two buttons to make it fire shots at air-based enemies and drop bombs on ground-based ones; there are a total of eight (unnamed) types of enemies, and their point values range from 50 to 1000.