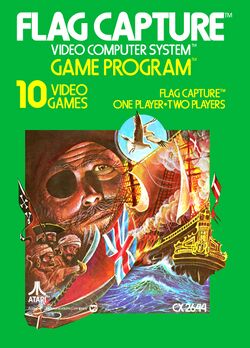 Flag Capture was one of the eleven Atari 2600 titles that were part of the second wave of games released in 1978. It can best be compared to a very early and primitive Minesweeper. One or two players must attempt to discover which tile a flag is hidden under. Players are given clues such as directional arrows which indicate the flags location, or numeric tiles which indicate the flag's distance. Players must also watch out for bombs which explode if revealed. It was released as Capture under the Sears Tele-Games label. 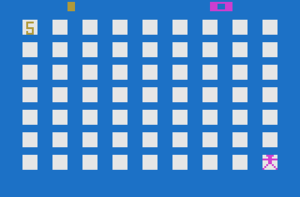 When you are satisfied with the position of your explorer press the red controller button. Any of the following objects will appear on the square:

Direction Clue
An arrow may appear which will point to the direction of the flag. The flag will be in the specific direction of horizontal or vertical arrows, and in the general direction of diagonal arrows.
Number Clue
A number may appear which will refer to the distance between your explorer and the flag. For example, if the Number 2 appears, the flag is somewhere on the perimeter of a 2-square radius. Here are a few examples of Number Clues. The shaded area refers to the possible location of the flag.
Bomb
This tile is trapped. A bomb explodes under your explorer and sends him back to the starting square.
The Flag
Finding this is the goal of each game. Once you discover it, points will be added to your score.

A player scores one point for each flag he finds during Free-For-All and Double Two-Player games. The first player to score 15 points wins the game.

During Two-Player Solo games, each player scores the number of turns it takes to find the flag. For example, if a player needs six clues or turns to find the flag, his score is six. The first player to score 75 points LOSES the game. In timed one-player games, the player scores one point for each time he finds the flag. He races against the clock to score as many points as possible in 75 seconds.

Free-For-All
Both players start moving their explorers across the maze simultaneously. No need to take turns. Pay attention to your opponent's clues if you can. The first player to find the flag scores a point.
Double Two-Player
Each player takes a turn to move his explorer and uncover a clue. The first player to find the flag scores one point.
Solo Two-Player
In these games, one player continues to take turns until the flag is found. Then it's the opponent's turn to find the flag. The object is to score the lowest number of points. A player scores one point each time he pushes the controller button and receives a clue.

One-Player Timed
The clock at the top of the screen times out at 75 seconds. That's how much time you have to find the flag as many times as possible. Once you find a flag, start over again.

Stationary Flag
The location of the flag remains the same throughout the game. Just study the clues carefully.
Moving Flag
Fast thinking and a little luck are the secrets to finding a Moving Flag. Each time a player takes a turn without finding the flag, the flag moves one square. The Flag continues to move in the same direction until a player finds it. The flag moves in a vertical, horizontal or diagonal straight line.
With Wall
Games that feature Moving Flags can also feature a Wall. The Wall is an invisible boundary around the maze. When a Moving Flag makes contact with the Wall, it will "bounce" into another square. The Moving Flag bounces at the same angle that it approached the Wall.
With Wraparound
When a game features Moving Flags with Wraparound, the flag will continue to move in the same direction, even across boundaries, and will never bounce back and change direction.