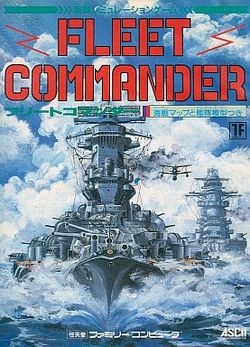 Fleet Commander is a strategy game developed and published by ASCII Entertainment for the Famicom in 1988. It is the first naval battle game ever released for the system. While it supposedly depicts a battle between two fictional countries, the game is largely recognized to be a recreation of one of the crucial naval battles that occurred between Japan and the United States near the end of World War II. Players control a Japanese fleet of heavy cruisers, battleships, submarines and aircraft carriers.

A couple of things set this game apart from typical Famicom games. First, in addition to the cartridge and the manual, the game also came packaged with a large map and plastic models which represented ships and airplanes. The game never shows the entire state of the water, so it is up to the player to use the information that he or she has to update the representation of battle on the map using the plastic models. Second, no background music is heard while playing this game. Finally, this game makes use of a device known as the "Turbo File," which was manufactured and sold by ASCII as well. This device was a hardware add-on for the Famicom which was used to save game progress. It was compatible with a number of other titles.