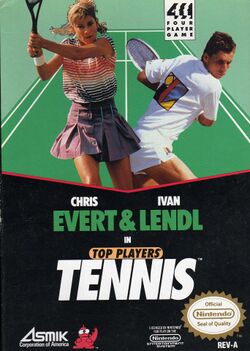 Top Players' Tennis (called World Super Tennis (ワールドスーパーテニス, World Super Tennis?) in Japan, and Four Players' Tennis in Europe) is a tennis game developed by Home Data for the NES/Famicom. Although it was published by Asmik in Japan and North America, Nintendo licensed it for publication in Europe. With a multiplayer console accessory such as the NES Satellite or NES Four Score, Top Players' Tennis accommodates up to four simultaneous players. Singles, doubles, or mixed doubles are all available for play.

The cover game prominently features tennis champions Chris Evert and Ivan Lendl, both of whom are former ATP number 1 ranked singles players, even though Chris Evert had retired by 1989. Both Evert and Lendl were removed from the 1992 PAL version, replaced with two generic characters. Alternatively, the player can choose to customize their own tennis player and allot points to various statistics, such as strength and agility, during their creation. Additional points are earned by winning matches.

The game offers singles and doubles match modes with various configurations of players. The player has the option to participate in four famous tennis tournaments. In single-player mode, the player may compete in the four Grand Slams: the Australian Open, the French Open, Wimbledon, and the US Open. To compete in the Grand Slams, the player must first win the qualifying tournament, the Asmik Open.