After generating financial success for Stern Electronics with Berzerk, Alan McNeil set about creating a sequel to the game, and it was entitled Frenzy. Frenzy keeps the basic theme of Berzerk, pitting a lone human player against a never ending army of robots through a never ending maze of chambers.

It expands on the basic premise by providing not one, but two different styles of robots, destroyable walls, shot reflecting walls, and a no longer invincible Otto named crazy Otto. Every fourth chamber contains a special feature that will sometimes alter the situation in the room if shot at.

Frenzy never achieved the same level of success and notoriety of its predecessor, possibly due to its increased difficulty. Coleco purchased the rights to bring Frenzy home to its home system, ColecoVision, but it never made an official appearance on any other console. 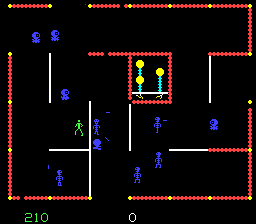