Move toward the CASEVAC site[edit] 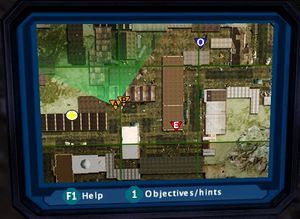 Map from the GPS

In the first part of the mission, you will need to head to the CASEVAC site. Although the GPS shows the location to the left, that's really an intermediate waypoint rather than being the actual route.

While the main path is to the right, there are enemies in the road behind cover, and it is considered too difficult to advance due to their positioning. You will need to take the alternate path to the northeast.

Once you have both teams somewhere against the east wall, you can head north. The militia guarding the road will not advance from their place down the road, allowing you to use the save point.

Once you save or are ready, you can advance to behind the first crate. This wooden crate is destructable cover and won't last long. However, the enemy militiaman is easily forced out into the open by moving from crate to crate. The second enemy is behind crates in the distance, and can be overpowered by having both teams perform regular fire. The third enemy is not behind cover, simply move to the blue car, and engage the target.

When all three enemies are defeated, you can use the second save point.

Note: This section has an RPG that may fire at your team.

You now need to approach the main road and clear the way for the Bradley.

Have one team move to the corner of the main road, and engage. The other team should use the red and blue cars on the right as cover. Have them advance until one of the enemies is exposed, then have them make the attack. The enemies may sometimes shift around (breaking cover), or move to a position where they have a better angle.

When the two visible enemies are killed, the Bradley and CASEVAC approach. A british solder arrives with a wounded, and mentions that his group wsa unable to confirm if the airstrike is successful.

Although he drops a wounded soldier, ignore the casualty as you can't interact with it (despite the chatter from your soldiers.) 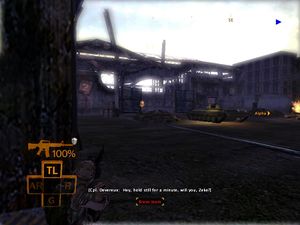 RPG and Armor, side by side

The last objective is to confirm if the airstrike is successful.

Approach the gate, with first a movement to the southeast. This causes one enemy to move from that corner. Afterwards, move both teams to the save point, and then enter the area with the tank. This triggers a cutscene where both teams enter and move behind cover - where your team sees both Armor and an RPG approaching.

One team should focus on keeping fire on the armor and RPG to distract them. Meanwhile, the other team should circle around to the right. Should the armor focus on Bravo, throw a smoke grenade either on the vehicle or to create a screen to the cover on the right.

Once one of the teams is slightly behind the vehicle, they will have a clear shot at the RPG, allowing the friendly Bradley to advance and clear out the last vehicle in the tankyard.