Around the first corder, you will need to advance your teams behind cover. There are a few enemies present, which may be engaged to allow your other team to advance. You will eventually get in line of fire of a machine gun nest - your allies will engage the enemies for you, allowing you to cross.

Advance to the low concrete barrier, and you will spot an enemy behind a car. Send the other team behind the green dumpster to the left, and open fire to eliminate the enemy. There is still a sniper on a roof that is too far to hit - as long as you engage him, the other team can approach the building, and force him to retreat. The path to the right allows you to reach a sitrep, leading down an alley.

The alley branches to the left and right. The right path gives a closer approach to the enemy, while still flanking the objective. If you take the left path, one insurgant will approach from the left but be out of cover - your team should focus on attacks coming from there. 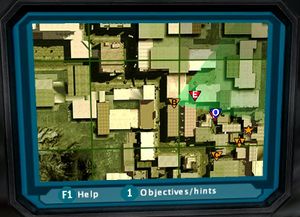 For the second objective, you get access to Charlie, a single private who is tasked with destroying stinger missiles.

Although the shorter and recommended route is to the right, you can approach from two different directions. There are only a few enemies guarding the stingers, none of which have significant cover. Send charlie to the objective - the stingers are visible (although unmarked).

Once charlie is delivered, regroup with Lt. Philips.

You now need to reach a hotel, to provide ground support to rangers who will approach via air.

The approach to the hotel is long streetways, sometimes with fragile cover. You can still approach by engaging with one team and advancing with the other.

The hotel parking lot has the enemies on the right. It may be difficult to approach directly, but you may have one of the teams circle approach by crossing the lot on the far side. Advance by taking cover behind the box, and cars - enemies will approach but will be in the open. When the two enemies on the left are down, you can flank the ones on the right-hand side of the parking lot.

Continue to the marker with both teams, using the sitrep as desired. 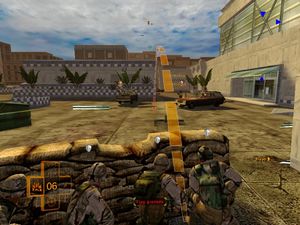 In the cutscene, you will see rangers enter by helicopter. This will force the enemies onto the road after the cutscene. Alpha will cover the north exit, while Bravo covers the south. Bravo should remain at their current position and hold still. If desired, you can advance alpha to the cover ahead in order to have targets enter thrown grenade range.

You can use spare grenades, as this is the last battle for this chapter. When all enemies are eliminated, head to the rally point to get instructions on being deployed to the airport.