Fury of the Furries

From StrategyWiki, the video game walkthrough and strategy guide wiki
Jump to navigation Jump to search
Fury of the Furries | Table of Contents | Gameplay | Walkthrough 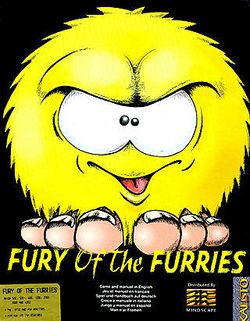 Fury of the Furries is a platform game developed by Atreid Concept S.A. and released by Mindscape for the MS-DOS operating system in 1993, and later for the Commodore Amiga and Commodore Amiga CD32 consoles in 1994.

Pac-In-Time (パック·イン·タイム, Pakku-In-Taimu?) was developed by Atreid Concept S.A. for Namco Hometek and initially released on the SNES and the MS-DOS operating system in the EU in December 1994 (and later in both Japan and the US the following month). It was also later released for the Game Boy in Japan and the US in January 1995, but the EU didn't get this version until February 1995. It's a reskinned version of Fury of the Furries but replaces the Tinies with Namco's signature character Pac-Man and all the coins with his basic sustenance of pellets.

The SNES version also reduces the length of the game to five worlds, changes their original themes, and has the added challenge of having to collect all the pellets in each level before its exit opens (as well as a final boss fight against the Gum Monster from PM2TNA), while the Game Boy one reduces the length to seven worlds (but skips the original game's "Mountains" one), replaces all its coins with pellets, and removes or changes certain enemies to fit the Pac-Man theme; all versions also replace the red Tiny's power to eat through blocks with a hammer that "Pac-Boy" needs to smash them with.

This is taken from the back of the disk's inlay card, the front of which is seen in the image to the right:

During the unsuccessful voyage
of the rebel Tinies to the Earth, an evil Tiny had captured
the king and got hold of the marvellous machine, turning
Sklumph into a planet of terror! Now that they have returned to their planet,
these small hairy animals have regained their natural abilities. They can swim (above
and under water), throw balls of fire, use a rope (to move about and grab objects) and even
eat some elements of the scenery! Only by using your lightning reactions and crafty intelligence to the
full can you guide the Tinies through over a hundred levels of their astonishing planet.
© Atreid Concept S.A., Kalisto Entertainment and Mindscape 1993

For the Pac-Man-themed SNES and Game Boy releases, a new storyline was added about the Ghost Witch of Netor (the primary antagonist for Namco Hometek's own Pac-Man 2: The New Adventures) casting a spell to send Pac-Man back to 1975, and causing him to regress into a young "Pac-Boy".