From StrategyWiki, the video game walkthrough and strategy guide wiki
< Fury of the Furries
Jump to navigation Jump to search

Fury of the Furries | Table of Contents | Walkthrough 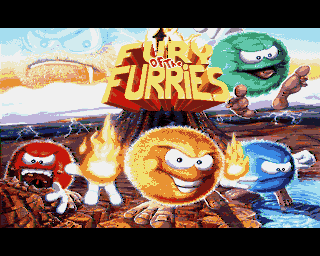 For the SNES and Game Boy reskins, you'll have to insert the Game Pak into the console, then switch it on; for the case of the SNES reskin, the Namco logo will appear on the screen (as they are the original creators of Pac-Man), followed by a new opening cutscene that reflects the game's new storyline:

OUR HERO PAC-MAN HASN'T
ALWAYS BEEN THE COOL VIDEO
GAME DUDE WE KNOW AND LOVE.

ONLY BECAUSE THE EVIL GHOST
WITCH AND HER FLUNKIES, THE
GHOST MONSTERS, INVADED HIS
WORLD WAS PAC-MAN FORCED TO
SURVIVE SO MANY CRAZY
ADVENTURES...

SINCE THEN, PAC LIVES HAPPILY
WITH MS. PAC-MAN AND THEIR
TWO CUTE PAC-KIDS.

BUT PAC'S FIENDISH ARCH
ENEMY, THE GHOST WITCH, HAS
VOWED TO DISRUPT HIS
TRANQUIL LIFE!

FOLLOWING THE FAILURE OF HER
DIABOLICAL PLANS, SHE DECIDED
TO ELIMINATE PAC-MAN ONCE
AND FOR ALL.

THE GHOST WITCH CAST A
FORBIDDEN SPELL ON PAC-MAN
RIPPING HIM FROM HIS FAMILY
AND HURLING HIM THROUGH TIME
TO HIS DANGEROUS PAST.

THE JOURNEY BACK IN TIME
TRANSFORMED PAC-MAN INTO A
YOUNG PAC-BOY.

THE GHOST WITCH SENT PAC TO
1975, A WORLD WHICH HAS NEVER
HEARD OF THE HERO PAC-MAN.
THROUGH THE WITCH'S FOUL
MAGIC, THE INHABITANTS OF A
ONCE BEAUTIFUL LAND HAVE
TURNED AGAINST HIM.

COMMANDING THIS MYSTICAL
HORDE ARE THE GHOST WITCH'S
LOYAL GHOSTS. THEY ARE A
PAC'S WORST NIGHTMARE AND
WILL DO EVERYTHING POSSIBLE
TO KEEP PAC PRISONER.

TO ESCAPE THIS DISTORTED
PAST AND RETURN TO HIS
BELOVED FAMILY, PAC-MAN MUST
TRAVERSE THIS HAZARDOUS LAND
AND PENETRATE THE CASTLE OF
THE HORRIFIC GUM MONSTER.
WITHIN THE BEAST'S LAIR
STANDS THE PORTAL OF TIME
PAC'S ONLY HOPE. HOWEVER, TO
REVEAL THE PORTAL REQUIRES
DEFEATING ITS GUARDIAN...

The game shall then proceed to its title screen, from which you shall have the option of starting a one- or two-player (alternating in the case of the latter) game, entering a password (for this reskin, you get one every five levels, but in the Game Boy one you get one every level), or proceeding to its options screen, by pressing

to select an option (which shall be indicated by the position of the "original Pac-Man" cursor on the left side of the screen), then pushing

to confirm your choice; however, on the Game Boy title screen you only have the options of starting a new game and entering a password. The SNES reskin also reduces the length of the game to five worlds, and adds an extra challenge of collecting all the pellets scattered round each level before reaching its exit (this is possibly also the reason why the timer got removed), while the Game Boy reskin only reduces its length to seven worlds.