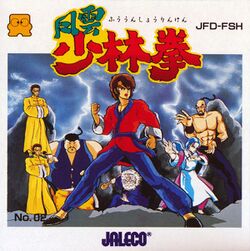 In Fuuun Shourin Ken, you control a rising martial artist who strives to defeat other great fighters. To do so, you must utilize a wide array of attacks to defeat your opponent before they knock you out first. You will compete in six different scenes against 13 different opponents. The game follows in the vein of Yie Ar Kung-Fu, and predates the original Street Fighter by only a couple of months. It features similar concepts such as a distinction between punch and kick attacks, relative directions, and a health bar for each fighter, depicted as a series of paper fans.

In 1988, a followup titled Fuuun Shourin Ken: Ankoku no Maou was released, which combined on-on-one fighting gameplay with visual novel cut scenes and choices to determine how the story plays out.

Note that this game is commonly mistaken as "Fuuun Shaolin Kyo" throughout the internet. This is not the correct pronunciation of the title in Japanese. The furigana provided for the title above the kanji, as depicted on the cover art, shows ken not kyo.

After defeating the three kings, you are given an ending message, and the game continues on at Stage 14. Stages 14 through 26 are a repeat of the first 13 stages, only the opponents are more difficult in some way. Additionally, you can't store extra health meters like you can in the original stages. The following table explains how things change.