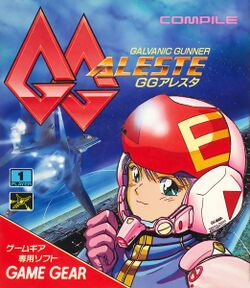 GG Aleste (GGアレスタ, GG Aresuta?) is a vertial shooter released in December 29, 1991 for the Sega Game Gear. It was only released in Japan and is one of the few Compile Game Gear games published by Compile rather than Sega.

"We have taken control of the Earth. Your future lives are forfeit!"

Calling themselves "Moon Child", they conquered Earth and captured a few remaining SDF soldiers who were sent to a colony under construction. While most soldiers are overtaken by despair, some still do not give up hope... A teenage girl and a genius pilot, Ellinor Waizen...

The special fighter GG Aleste, developed specially for her, was secretly brought into the colony by the development team led by Ellinor's grandfather Seft Waizen. Ellinor now heads into the void where the battle awaits, piloting the GG Aleste to save the Earth.