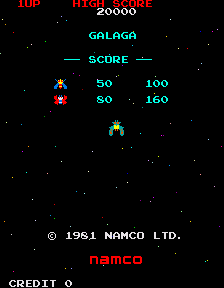 Diving enemies are worth more points than those in formation. The more escorts that a Boss Galaga dives with, the more points it's worth. Occasionally, Boss Galagas will hover in midair and emit a tractor beam. Enter the tractor beam to get captured. Once a Fighter is captured, rescue it (but don't shoot it) from a diving Boss Galaga (not in formation) to have it rejoin you for double fire power. Challenging Stages test your accuracy. Earn more bonus points for more enemies destroyed.

This ship is under your control. You can move left or right, but you are relegated to the bottom of the screen. Your Fighter has a special ability to link up with other Fighters, allowing the two to work side by side, firing simultaneously. You can't just activate this ability however. You must rescue a red captured Fighter first. You can fire up to two missiles on to the screen at a time per ship. This means if you have two Fighters linked together, you can fire up to four missiles at a time. You are awarded extra men for reaching particular scores (set by the arcade operator). However, once you reach 1 million points, you will not receive any extra after that point. Any extra men beyond 8 will continue to be awarded, but not shown on the screen.

The front line of the Galaga army. Bees make up the bottom two rows of the formation at the top of the screen. They will occasionally break from the formation and go on a bombing run, attempting to shoot you or crash in to you. After their initial dive, they may make a round swoop back upwards, attempting to hit the fighter from behind. Either is fatal to the Fighter. They are worth more if shot down during a bombing run than when shot in formation.

The Butterflies occupy the two rows above the Bees. They will break from the formation as well to go on bombing runs like the Bees and have a tendency to quickly steer left and right while diving, making them harder to hit. But the very top row of Butterflies will also accompany a Boss Galaga as an escort when the Boss Galaga is not attempting to use a tractor beam on your fighter. Try to eliminate as many of them during the opening of a stage when the formation is still being built.

The Boss Galagas resemble birds. Unlike the rest of the Galaga army, they must be shot twice in order to be destroyed. The first shot merely changes their color from green to purple. In either color, they will do one of two things. Either they will go on a typical bombing run, and possibly take one or two Butterflies with them, or they will initiate a tractor beam run. When a Boss Galaga starts a tractor beam run, it brings no Butterflies along, and it loops just once at the top of the formation. It slides down to about mid-way along the screen, and starts the tractor beam. If your fighter is caught in the beam, it will turn red and be captured and brought up to the top of the screen.

Once per stage (beginning with Stage 4), a Bee (or a Butterfly if no Bees exist) will transform into a set of three enemies. The type of enemy that gets created changes every couple of stages. This set of three enemies will dive down, firing at you on the way, and make one final loop before exiting the screen. Unlike Bees, they do not return to the formation from the top. Killing some of them awards you points, but killing all of them awards you a big bonus. They are, in order, Sasori (Scorpions), Midori (Bosconian Spy Ships), and the Galaxian Flagships.

Galaga has indicator badges to show what level you are currently on. A combination of these will add up to your current level, all the way up until stage 255 (at the highest difficulty setting; the game does not end after Stage 255). For instance stage 99, will be shown by 50+30+10+5+4 level 1 indicators. Then for stage 100, 2x50 stage indicators will be shown.

At some point around stage 200 or so, the stage indicator will cut into the extra men, if you have 8 of them. It will then show 7 1/2. This is just a graphical glitch.