These conversions of Galaga were released around the world. 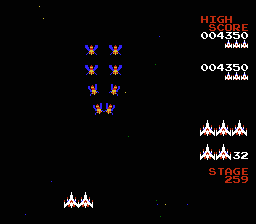 3 million points on the NES

The game does not end at level 256. The stage counter turns into numbers at stage 200, indicating it could go up to stage 999. Also, since the scoring has 6 digits, 999,990 is the maximum score, but if you score in the millions, a small galaga ship for each million is located under the numbers, possibly going up to 7 million. On the NES version, a small galaga ship is shown under the score to indicate millions, since the normal score only has six digits. Here the score shows 3 million points.

Microsoft made Galaga available for download on the Xbox Live Arcade for 400 points. It is very arcade accurate, and contains achievement points that can be earned for completing certain tasks or stages. Unlike the arcade version, Microsoft/Namco have fixed this version to go past level 255. Once you complete all these levels, the game starts over at level 1. You can select from any of the levels up to 254. Level 255 is the last bonus level.

These conversions of Galaga were only released in Japan.

These are unofficial clones of Galaga for various systems

Galaga received far more home conversions in Japan than it did in the U.S. despite being more popular than Galaxian. Selected box art examples are shown below: