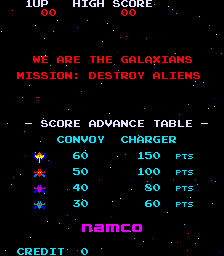 You must destroy every Galaxian to advance to the next stage. Galaxians will break from the formation and dive bomb your Galaxip, and you must avoid contact with every Galaxian and their bullets. Diving Galaxians are worth more points than those in formation, and the more red escorts that a flagship dives with, the more points it is worth.

Your ship is named the Galaxip. It is referred to as the Galaxip after you enter a quarter and the screen says "BONUS GALAXIP AT 7000 PTS." You and the Galaxip are Earth's last hope against the Galaxians. You must use the Galaxip to position yourself beneath the Galaxians and fire up to destroy them, while directing the ship so as to avoid collision with the bombarding aliens and their shots. Collision with anything results in the loss of one life.

Eight purple Galaxians occupy the fourth row of the Galaxian formation. They are faster and deadlier than their blue cousins, but not as dangerous as the red ones. Their dives tend to be a little more direct, and are harder to dodge, so it's best to eliminate them on the way down, or steer clear of their projected collision point.

There are only six red Galaxians in each formation occupying the highest row beneath the Flagships. Although they are only as fast as the blue Galaxians, they have a special role in the Galaxian empire. They serve as escorts to the flagships when the flagships descend. Up to two red Galaxians will defend a flagship on bombing run, and will remain in tight proximity with the flagship the entire way down.

Almost as recognizable a Namco icon as Pac-Man, two Galaxian Flagships adorn the very top of the formation. When the Flagships begin a bombing raid, they will take up to two red Galaxians with them as defense. The more red Galaxians you destroy while they are diving towards you, the more points the Flagship will be worth to you if you can destroy it in flight. Go for the points if the cluster is a safe distance from your ship, but don't allow greed to compel you to crash into them when they get too close. If a Flagship manages to escape at the end of a round, it will return at the start of the next round, resulting in three Flagships at the top of the formation. A maximum of ten Galaxian Flagships can be on one round at the same time with this tactic.

If you shoot the flagship on its bombing raid, the remaining Galaxians diving at the time will stop shooting. This is your brief chance to pick them off while they can't shoot back.