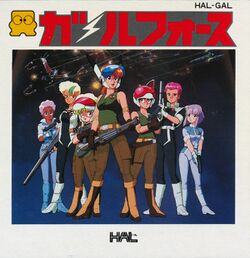 Gall Force - Eternal Story is a video game based on the anime of the same title, developed in 1986 (the same year as when Eternal Story was released) for the Family Computer Disk System. This game is the first commercial release by HAL Laboratory, creator of the popular Kirby series. It was also the only game developed around the Gall Force series. It was never released for play outside of Japan.

Gall Force is a group of science fiction anime OAV series by the studio Artmic, with production by Youmex and AIC. The original character designs were by Kenichi Sonoda. In the original story line, an all-out, prehistoric galactic war rages between the all-female Solnoids and the amorphous Paranoids for too long. In the midst of battle, a plan which was secretly hatched by the leaders of both sides comes into fruition, and an unsuspecting crew of seven Solnoid soldiers aboard the Kulanis-class Cruiser named the Star Leaf is caught up in the middle.

The Famicom Disk System game is a top down shooter and follows a different story than that of the OAVs. It features Rabby flying across Terra, and catapulting into six different regions of space in order to rescue each of her crew members one at a time. With each crew member that you rescue, you gain access to a new configuration for your ship.

The central character and next in line after Eluza in the chain of command, Rabby is loyal to her shipmates above all other things. She pilots the Star Leaf, in a desperate attempt to rescue her six crew mates, who have been kidnapped by the Paranoids. The Star Leaf has a fair degree of defense, and a specialized system which offloads damage to the side compartments, or "wings," of the ship. When either compartment takes too much damage, the Star Leaf jettisons the compartment. When both compartments are lost, the central nose cone withstands all of the damage until the craft is destroyed. The offensive capability of certain configurations of the Star Leaf can be affected by the loss of a compartment. In its default mode, the Star Leaf fires a primary laser through the central nose cone. As the Star Leaf levels up, the laser strengthens until it is released as a fireball at the highest level.

The shy and easily frightened computer expert of the crew, Pony gets along much better with artificial intelligences than she does with any of the organic crew members. Her closest friends are Catty and the ship's computer, OX-11. After being rescued by Ruby, she assists the Star Leaf by programming fighter mechs to fly alongside the Star Leaf and attack the enemy using basic combat strategies. Up to three can be employed at one time. Each one will behave slightly differently. The blue fighter flies back and forth along the same vertical height of the screen as the Star Leaf and fires upward. The red fighter hovers around the Star Leaf until it senses an eminent attack, and flies forward to engage the threat. The green fighter essentially travels all around the visible screen trying to contain peripheral threats.

A follower, not a leader, Patty's distinguishing characteristic is her tendency to go into trance-like moments of distraction. Her Star Leaf configuration is to open all of the side array lasers, allowing the Star Leaf to fire laterally in both directions. This configuration is extremely weak offensively since it can't be used to destroy oncoming attacks, but it is extremely useful for discovering the locations of hidden power-up tiles. At full power, the arrays fire a wide burst of lasers that can clear multiple rows of structures extremely quickly. Naturally, the effectiveness of this configuration can be hampered by the loss of one compartment, limiting firepower to one side of the Star Leaf. The lose of both compartments extinguishes this configuration completely.

Technically not even a member of the Star Leaf crew, Lufy crash-lands in a crippled Bain-class fighter just before the Star Leaf jumps into hyperspace. She is a cocky ace fighter pilot who pretends not to take dangerous situations seriously and does not follow orders very well. If she is aware that Rumy does not like her, she does not seem to care. Her Star Leaf configuration suits her personality very well. She has, by far, the most offensive configuration, opening all of the forward array lasers. At the lowest level, it only fires two lasers, one on either side of the nose cone. At full power it fires eight lasers in total, arranged far wider than the Star Leaf itself, and contains a lot of destructive power. Losing one of the compartments limits the laser fire to one side of the nose cone, which at full power is still fairly effective. Losing both compartments reverts the Star Leaf to Rabby's central laser.

The eldest and highest ranking of the major characters. With the captain of the Star Leaf in a meeting on the fleet flagship, Eluza is the next highest officer and in temporary command when the Paranoids attack the fleet. Her Star Leaf configuration is the opposite of Lufy's, opening all rear laser arrays. This allows for a wide blast of lasers to be fired down at any enemies located below the Star Leaf. While this configuration is powerful, it is difficult to use effectively in dangerous situations, as most of the threat to the Star Leaf appears from the front. Like Lufy's configuration, the effectiveness of this configuration is cut in half if one compartment is lost, and returns to Rabby's central laser when both compartments are destroyed.

The youngest of the shipmates, she is the least capable and hardened of the soldiers and fills in the anime mascot cliché role. Rabby acts as a big sister to her, scolding and shielding her. She dislikes Lufy. Her Star Leaf configuration is unique in that it does not open any of the laser arrays. Instead, it deploys a cannon over the central nose cone that rotates 360 degrees. It fires automatically, so pressing buttons isn't required. At each progressive level of power, the cannon fires more bullets and fires them more rapidly. Unfortunately, the game restricts the number of bullets that may be on the screen at one time. This configuration has questionable effectiveness. It cannot be relied upon in dangerous combat situations, but you may be surprised at how effective it can be while traveling through regions with relatively low numbers of enemies. You may not have to move the Star Leaf at all. It is also unaffected by the loss of either compartment.

A soft-seeming and idealistic crew member, she is really an android copy created by the Solnoid intelligence chief, Catty Nebulart, to monitor the development of the "third race" - the Terrans. Catty is the last crew mate that Rabby can rescue. She does not provide the Star Leaf with an alternate configuration. Instead, it is believed that by having rescued her, she assists by improving the defensive capabilities of the Star Leaf, allowing it to endure more damage than it could without her. This benefit is always in effect, no matter which configuration you select.