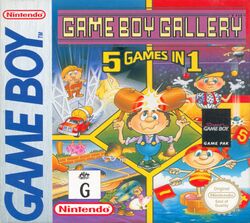 For the similar named game in the same series, see Game & Watch Gallery.

Game Boy Gallery is a game developed by Nintendo and released for the Game Boy. It is the first game of the Game & Watch Gallery series, but was only released in Europe and Australia. The game has some differences from the rest of the series, such as it can only be played in one default mode that is in the style between modern and classic, rather than having the choice. The game is also unable to save high scores.

The games have A & B Game options where A is easy and B is more difficult. The games also can be played with either the new Game Boy sounds and music or with the old Game & Watch style sounds. 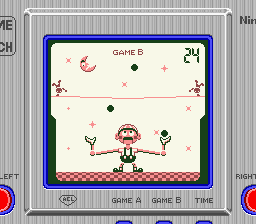 In Ball, players control the arms of a wooden puppet that is juggling balls. This is the simplest and easiest game, but the downside is that, unlike the other games where you can get 3 misses, you cannot get any misses in this game. The point is simple, align the hand with the ball, you get a point and the ball will bounce away to the other side to do the same. There are 3 balls and each one follows their own set path: outer, middle, and inner and don't skew out to the other ones paths. There really is no strategy to this game besides keeping your eyes on the balls. 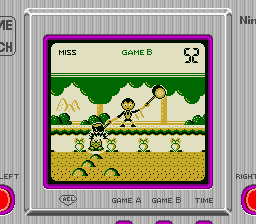 In Vermin, players control a mallet wielding man who smashes moles on the head. The point of the game is to prevent moles from eating the vegetables in the garden by bonking them on the head when they rise out of their hole. To do this the player must align the mallets with the designated hole where the mole is rising out of. The game is simple and you get 3 shots when playing. Just as the same was with Ball, your best strategy lies in your eyes and seeing which mole is rising first. 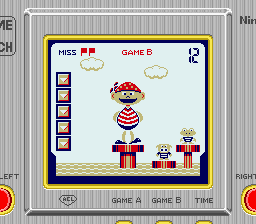 In Flagman, players must carefully watch everything that the flagman pirate does. He will show the player a certain direction and the player must repeat it and will continue in a string. Players have 3 chances and after every lost or completed round the flagman will repeat himself. There is also a timer that counts down and after every inputed direction it is refilled. On B Game, after the 5th round a pig will appear with a new sign and after the 10th round a frog will do the same. The best strategy is not only to memorize the directions and the numbers, but the sounds as well, so there are 3 things helping you. Another method is to cheat and grab a pencil and paper and just start writing the string of directions, but that isn't much fun and is defeating the point of the game. 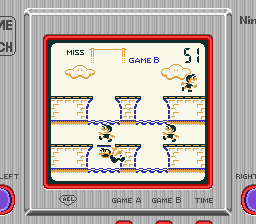 In Manhole, the player controls some guy who apparently owns the only manhole cover in town and takes matters to his own hands by helping people (who cannot see under their feet) cross manholes. There are 4 open manholes on 2 busy streets (or bridges?) and you can't let the people fall into the water or you'll get a miss, and 3 misses and you are out. You gain points with every step the pedestrians take on your manhole cover. Just remember to keep your eye on all the people and their timing. 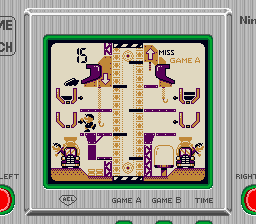 In Cement Factory, the player controls a worker whose job is to pull levers and release cement. This game is pretty difficult since it requires timing and a careful eye and will lead to much panicking. The factory releases the cement from above into a container, which may fill up to 3 levels, and the players job is to release it onto a bottom container that also fills up to 3 levels and then release it onto a cement truck. If that doesn't sound like much then think again because the same thing is happening on the other side of the factory and to reach that side the player must cross elevator platforms that are rising and lowering. The player must not let the containers fill up and spill and cannot drop onto a platform that out of their reach. Your strategy: just be good.