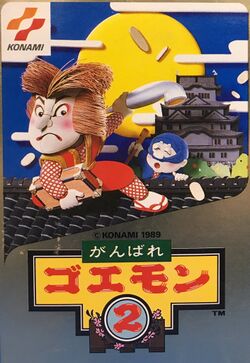 Goemon 2 retains many of the gameplay elements introduced in the first game, but the graphics have been improved, and levels are more interesting. The numerous underground passages have been reduced in favor of more detailed scenery above ground. Some of the maps contain new vertically scrolling sections, which may involve crossing a bridge, or perhaps scaling a long flight of stairs. And first-person dungeons return from the previous game as well. Now two players can play the game simultaneously, with the second player taking on the roll of Ebisumaru. Goemon gains a new weapon, enemy-seeking firecrackers, which is not always effective.

While Goemon 2 does a good job presenting life in feudal Japan, it also makes several jokes about the times, as well as fourth-wall breaking video game jokes. It also contains a number of Konami references, including a shop which sells other Famicom games. Purchasing these "cartridges" turns certain NPCs into recognizable Konami characters from other games. Even the game over screen is original, featuring an escape from hell before you are able to continue your game again.

The game has been rereleased several times in Virtual Console format, for the Wii, Nintendo 3DS, and Wii U, but like the original game, it has never been published outside of Japan. However, a fan translation of the game, translating the game into English, has been made available and can be found here.