This is it! You've made it to the final stage of the game: Karakuri Castle. Unlike all the other stages, you won't be running through any villages. The entire stage takes place in the castle. You have to visit many floors until you can challenge the lord of the castle. Along the way, you'll encounter several mini-boss battles. You begin your journey on the first floor. 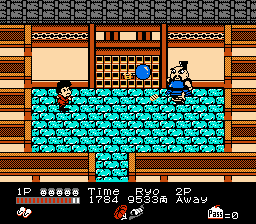 The first floor is relatively straightforward. You begin outside the castle, among several doors. Only one door will open and allow you to enter the castle, and it's near the middle. Once inside, you will find that very few hallways give you a choice in directions. It's only until you go up three hallways that you find multiple exits. Both of the doors headed down lead to an empty hallway, but two of the doors, labeled A and B are shops. Definitely pick up some Onigiri from door A if you don't have any already, and buy food from the restaurant if you're low on health. Then head up through the door to the left of A. Once up there, you have another choice. You can head straight through the right door to the boss battle if you feel you're prepared, or go a little farther to the left door, where you'll find a prison. Behind the prison doors, labeled C and D, you'll find men who will help you by increasing your weapon level or your speed level, just as if you collected a cat or a mask respectively.

When you are ready to take on the boss, head through the right door. The boss of the first floor is fairly simple. He runs back and forth in the room, popping explosives over his head which alternate between arcing left and right before falling to the floor. After taking enough damage, he sometimes produces a very large blue ball which bounces away from him and explodes. As long as you have a Level 2 weapon or better, you can just run to the opposite side of the room and fire at him. Otherwise, you'll have to very carefully club him and then get out of the way of his explosives. When he is defeated, he'll drop a key, which you can pick up and head through the door to climb up to the next floor.

Throughout this floor, you will encounter a new variety of enemies. The two common enemies are a pair of robotic guards who mindlessly attack any intruder. Along with the robots, you will also encounter indestructible gears which bounce through the hallways, small jet robots who move in a straight line with incredible speed, and Daruma dolls which rotate in place. The dolls can't be destroyed, but they can be rendered harmless temporarily if you strike them. In some hallways, you will encounter rocks that fall straight down from the ceiling. In these same hallways, you may also notice that a wind or a force blows to the left or the right in certain sections.

The second floor is a bit more complex than the first, but not by a lot. The trick with this floor is that there is no boss. Instead, you must locate and collect the key before finding the gate. The key can be found by heading right from where you begin, and then down into the hallway below. Then head all the way to the left and take the last entrance up. Continue to the left until you find the key. Then return to the previous hallway. Do not head down the next path down, but continue heading back to the right until you find another path down. The left path leads to a dead-end. Only the right path takes you to where the staircase can be found. Be sure to pick up some armor from the shop by the door labeled F if you don't already have some.

The third floor is not the last floor, but it is by far the most complex floor. Along with a few hallways, it contains long stretches of vertical corridors that connect some hallways together. Some of these corridors contain barriers which you must leap over. Once again, you start outside the castle, and you have to find the one door which leads you inside. All of the other doors deposit you in front of another door. Once inside, head to the right to reach the first vertical corridor. Head up and go to the right to another corridor. Head up again and go to the right to reach a third corridor, and then head down a short distance. 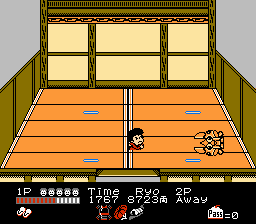 From here, you must continue the only way that you're allowed in order to reach the boss of the third floor. When you start on this path, you'll pass by the door labeled G on the map. This is your last chance to purchase any of the valuable items which help protect your life. Stock up before you continue on to the boss.

The boss of the third floor is a cartoony representation of the boss that appears at the end of every stage in the game Gradius, known as the Big Core. This Big Core isn't nearly the level of threat that they are in Gradius. It moves up and down in an attempt to line up with you, occasionally firing lasers. When it does line up with you, it will expand its wings in order to shoot you with even more lasers. Your goal is to strike it enough times until it explodes. When you do enough damage, one of its wings will get stuck in the open position, indicating that it's close to being defeated. It takes around 15 hits to defeat the Big Core.

From the fourth floor on, the floors start to become much simpler. The hallway of this floor contains only one door. Once you enter the door, you will find yourself in a room with four exits in each direction. Without knowing the secret of these rooms, you may wander around in them aimlessly forever. Once you figure out the correct sequence of moves, you will eventually escape. When you do, you will arrive in a hallway that looks very much identical to the one you were in previously. However, if you head to the right, you will find another door which leads to the staircase up to the next floor.

The secret of floor 4

Floor 5 starts you outside the castle again, this time in front of four doors. All four doors lead to a room, but only the left door leads to a room which is not empty. The room behind the left door has a group of small statues all over the floor. You can actually leap over two of the statues to produce a cat or a mask. There is an open door in the back. Head through the door and you'll find a switch. Push the switch to the on position and return to the previous room, and you'll find a staircase has appeared on the floor. Go through it, and exit through the door on the bottom. In the hallway you arrive at, head to the right and enter through the next door to find the staircase back up to the fifth floor. 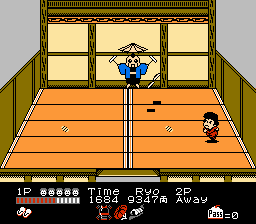 You arrive in a single hallway that contains two doors. The left door leads to a boss battle. A little further to the right, you can find another door that contains a store. There you can buy the Onigiri for 500, the Armor for 400, or the Hourglass for 550 (assuming you haven't purchase any of these items before.) Stock up on what you need and then return to the left to challenge the boss.

The boss of this floor is a robot who spins in mid-air with an umbrella on his head. As he spins he travels around the room in a sidways figure 8. He stops occasionally to fling two discs at your current position that spread out slightly as they travel. Naturally, you need to strike the boss enough times to defeat him and advance to the next floor. It takes around 20 hits to defeat him. 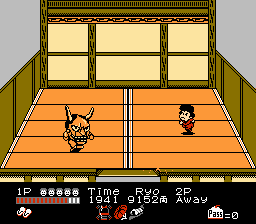 You begin in a hallway which contains one door that leads to a restaurant. Purchase the food from the restaurant if you're in need of some health, and then continue to the right where you will find a passage to a corridor below. Head down through the corridor, jumping over a few barriers along the way, until you reach the next hallway below. This hallway also contains only one door, and it leads to the boss battle.

The boss of this floor is a demon with a very large head, who bounces back and forth across the floor. Every now and then, he will stop mid-jump, and some sparks will appear between his horns. He will release that energy in four beams that travel in all four diagonal directions. To avoid them, simply stand directly alongside him, or beneath him. Focus your attack on him when he's easier to hit on the ground, unless you can throw weapons at him while he's in the air. It takes around 25 hits to defeat him. 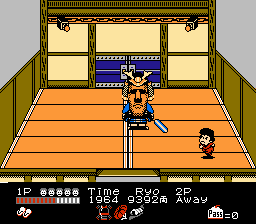 On the last floor, you don't even need to navigate a hallway. Simply head up through the open door to discover the final boss. When you first step inside, you will be greeted by another mainstay of the Gradius series, a Moai statue dressed in feudal Japanese garb. He will move back and forth across the floor, stopping occasionally to release one of his traditional energy rings from his mouth. None of your attacks will appear to have any effect on him. However, you may notice the flashing projectors on the ceiling. Destroy these as quickly as you can (you may have to jump if you only have a Level 1 weapon.) and the true boss will be revealed. 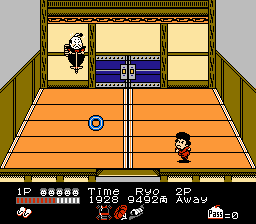 The true boss is the lord of the castle. He attacks you while hopping across the floor on a pogo stick. He still retains the ability to throw the Moai's energy rings at you. You must hit the boss enough times to defeat it and win the game. Like the previous boss, this one takes around 25 hits to defeat. He is more vulnerable near the bottom of the pogo stick than near the top of his head. Once you destroy the boss, you will automatically advance through the door where the ending cinematic will begin, and you will learn about the true reason why Ebisumaru was so interesting in exploring Karakuri Castle.