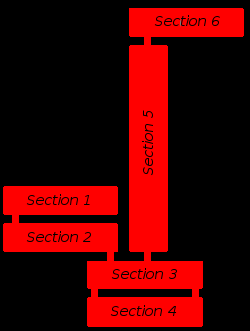 The first stage of the game takes place in a prison. When Goemon and Ebisumaru are sitting around in jail, Ebisumaru asks Goemon if he's heard about the treasure in Karakuri Castle, and Goemon figures he'll break out of jail since he has nothing better to do. And so he does. You start out as Goemon makes a run for it. The prison is part of a small isolated village with just one shop, an inn and some homes. The boss of the village lives in a room at the very top of a tall mansion. You'll have to find and defeat him in order to save the people of the village, before you start making your way to the castle. There's one underground passage which connects Section 3 with Section 6, allowing you to bypass most of the stage without missing anything too useful. If you take it, you can also collect some money along the way. All of the prison guards give you 10 Ryo for defeating them, it's a good idea to take out between 10 and 20 of them before you leave so you can purchase items. They're cheaper on the first stage than anywhere else in the game.

Hidden extra life
If you exit the jail and enter Section 3, you can jump over the gourd to power-up your weapon. When you have a weapon you can throw, return to Section 1, and shoot at the upper right corner of the jail (to the right of door C) to reveal an extra life.

Hidden gyro
If you jump over the bushes between pathway e and door H, you will expose the hidden gyro in this stage. Collect the gyro for temporary invincibility. Note that this invincibility will end immediately if you leave Section 3.

There's only one underground passage in the first stage.

It connects the hidden staircase below the shop in Section 3 with the lower left corner of Section 6, just to the left of the entrance.

You can use it to bypass all of Sections 4 and 5.

Collect the two boxes along the way for 200 Ryo.

You start at the bottom of a very tall mansion, and you must reach the very top in order to challenge the village head.

To get there, you must jump from roof tile to roof tile.

Various guards will attack you as you climb.

When you see doors open on your way up, be prepared for an enemy to appear and attack you.

When you reach the open door at the top, press

to enter through the door to Section 6. 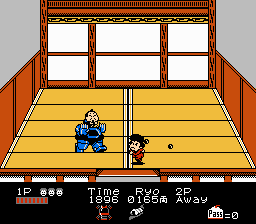 When you enter door P of Section 6, you will arrive in an open room with a large robotic sumo wrestler. This robot will begin to approach you. Other than colliding with you, it has only one other attack: It throws its toupee at you like a boomerang. The toupee is fairly easy to dodge. If you purchased the Armor and Onigiri from the rooms on either side, you'll have little to worry about throughout this fight. You'll need to hit the robot with your pipe or with koban coins around eight times in order to damage it sufficiently, which will cause it's head to pop off. This will expose the village head as the pilot of the robot. The attack will then change, and the robot will throw smoke bombs on the floor to attack. Position yourself just below the robot so that you can safely attack it without being in danger of getting hit. Continue to hit it as rapidly as possible until it is fully destroyed. The village head will hop out and plead for mercy. Then you will shower his riches upon the villagers before advancing to the second stage of the game.