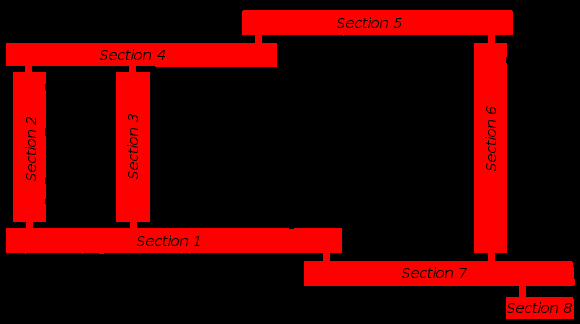 The fourth stage of the game takes place in the region of Chugoku. The Chūgoku region is the westernmost region of Honshū, the largest island of Japan. This stage is peculiar in a number of ways. First, it has no secret underground passages. Second, it has not one, but two dungeons, and the entrance to them is free. Third, you will encounter a boss battle near the stage exit. Several vertical passages connect two lower sections with the two upper sections. There are a number of new enemies, including white rabbits, and rolling bales of hay. There is also a short, fast moving enemy in long white sleeves who has a tendency to steal items from you if you let him get close enough.

Hidden gryo
A bridge begins near the middle of the stage and extends to the right. Between door C and the left end of that bridge, there is a small set of bushes on the bottom. Jump over those bushes to reveal a gyro.

Hidden extra life
Shoot the door of the very large house, door O, to reveal and extra life. Take extra care when you approach it, because if you enter the building first, the extra life will disappear. Reveal it, and then run along the side of the building and jump up to collect it. 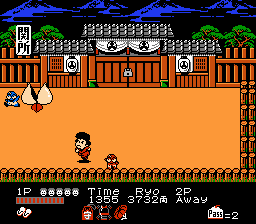 By the time you reach this section, you probably have found the two passes in both of the dungeons, but you may be wondering where the third pass can be obtained. When you start heading to the gate, a boss will appear and challenge you. This boss is nothing more than a gigantic peach. It moves around in a circle, and does not attack you directly. However, as it moves around, it opens itself up and releases little red and blue demons who come chasing after you. Very little strategy is required to defeat the peach. Simply stand on the right side of the screen and shoot coins at it. If you stand far enough away, the demons will be hit by your coins as they approach you. Keep hitting the peach with coins until it is defeated, and it will release the third Pass, allowing you to proceed to the next stage.

As with Stage 2, striking one of the red scarfed statues will send you to hell, where you will be forced to run to the right until you can find a statue to strike that will return you to the game. While you do get some Ryo for killing enemies, it's generally a bad idea to come down here, since you are likely to take a good deal of damage during your escape.