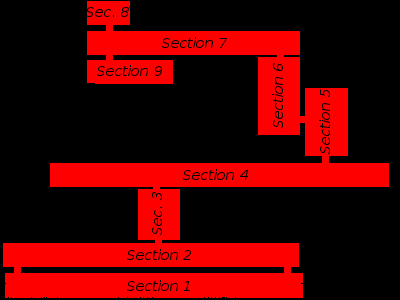 The eight stage of the game takes place in the region of Tōhoku. The Tōhoku region consists of the northeastern portion of Honshu, the largest island of Japan. Tōhoku retains a reputation as a remote, scenic region with a harsh climate. In the game, it matches this reputation by forcing you to endure long climbs up steep vertical sections, snowy environments and enemies that are normally only observed in the underworld. The stage contains a boss that you must defeat in order to obtain one of the three necessary passes. On top of that, this stage does not sell any Passes, so you are forced to find the other two, and shops don't sell any candles either.

Hidden gyro
Between doors B and C is a long row of bushes in the middle of the path. Jump over the left end of those bushes to reveal a gyro. Collect it for invincibility.

There are no shops in this section. Whether you entered from the left side or the right side, your goal is to safely make it to the middle of the area where you can access the entrance to section 3. Alternatively, there is a hidden passage to discover which contains a Pass, but also allows you to bypass the long climb up Section 3 entirely.

This section is another vertical area in which you must jump up ledges in order to climb a mountain and reach the next section at the very top. The platform branch between the left side and the right side, and occasionally one branch will dead-end. If that occurs on your current branch, simply leap over to the opposite side and continue. Watch out for enemy guards, birds, and falling rocks as you make your way to the top.

This section contains a number of new and unusual enemies, including snowmen who will either bounce towards you, or throw their own heads at you, a ghost who blinks into existence, and an unusual girl who works like other women in that she'll give you Ryo if you collect her, but lose Ryo if you shoot her.

From here, all you can do is continue your long climb up the flight of steps to the very top where you will find the entrance to Section 7.

You must be very careful in this remote mountainous region of Japan. The enemies that you encounter here are normally the enemies that are reserved for the hell sections in previous stages. Also be very careful to avoid falling into the pools of water. Before you head down to Section 9, you should go up to visit Section 8 first. 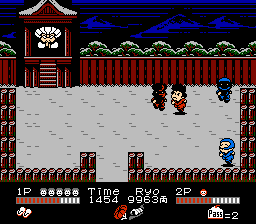 When you arrive in this single-screen section, you will see a man sitting in the shrine in the upper left corner of the screen. He will summon an enemy to fight you. If you are playing as Goemon alone, only a shadow Goemon will appear. However, if two player are playing together, a shadow Ebisumaru will appear as well. Both shadow opponents will behave just like your regular characters, using whatever weapon you happen to be using. So if you enter the fight with a level 2 weapon, they will use the same level 2 weapon. And if you get injured and drop down to a level 1 weapon, they will also use level 1 weapons. They aren't too smart and there's a greater danger in accidentally running into them because their movements are fairly random and unpredictable. It's a great idea to make sure you have Armor and Onigiri in your inventory before you enter this battle, as it will ensure your survival. Once the shadow opponent (or opponents) is defeated, the man in the shrine will fall out and a Pass will drop from the sky.

Once you have collected the passes from the first underground section, the dungeon maze, and by defeating the boss in Section 8, you will be able to pass through the gates and advance to the next stage.

There are two underground pathways in this stage. The first one (shown right) connects Section 2 with Section 4, allowing you to bypass the long climb up Section 3, and netting you one of the three Passes in the process.

The second underground path (shown below) connects the other side of Section 4 with Section 7. Although it contains some food to restore lost health and some boxes of money, it bypasses the vertical ascent up the steps, including Section 5 which contains the hut with the dungeon maze where you'll find the second Pass. If you take this passage up to Section 7, you'll have to double back down Section 6 to reach Section 5.