The ninth stage of the game takes place in the region of Ezo. Known in the modern day as the Hokkaido region, it is the second largest island of Japan, and the largest and northernmost prefecture. Compared to the complexity of the previous stages, this stage is actually fairly simple and straightforward. It only consists of five sections, one of which is extraordinarily long, and one of which you don't even need to visit if you don't want to. There's a pass in the only underground section, which can be found right where you begin, and a pass in the dungeon maze. In order to obtain the third pass and escape, you'll have to challenge and defeat a large bear. Note that there is no store in this stage that sells Armor or any of the passes.

This section is entirely optional, and only needs to be visited if you wish to shop in either of the buildings. 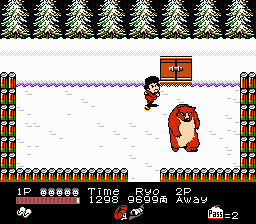 To obtain the third Pass of the stage, you must defeat this large bear that guards the gate. This bear has a preference for running up to people, picking them up and throwing them over his shoulder. Whenever the bear lines up with you, vertically or horizontally, it will pause for a moment before rushing over to you. If it manages to touch you, it will toss you into the air, which will damage you. This fight will be very tough with only a Level 1 weapon, and it will be substantially easier with a Level 2 weapon. For Goemon in particular, the Level 3 weapon can actually come very much in handy here, since the bear constantly moves in your direction. You can drop the firecrackers on the ground while you run away from the bear, and they will rush toward it. Hit the bear enough times until he is defeated. Then a tiny bear will appear and run off the stag before the pass will fall from the sky.

This underground passage connects Section 1 with Section 5. Along with the pass it contains, it has some health restoring food as well as the health extending package. If you have already collected the previous two packages, and your health meter is at 16 bars, all the package will do for you is replenish all of your lost health.