The goal of the game is to guide Goemon safely through all 10 stages of the game. Each stage takes place in a different region of Japan. Unlike the original game, Ganbare Goemon! Karakuri Douchuu, the game does not repeat when you reach the end. Instead, you are shown an ending to the game, along with developer credits, before the game concludes. 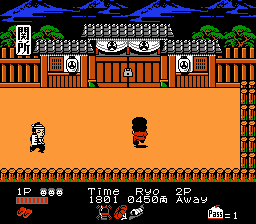 You must possess three passes to pass through these gates

Though not true of every stage in the game, particularly the first and the last stage, the goal of most stages is to collect three passes and locate the exit gates that lead to the next stage. Everything else that occurs throughout the stage will either help you or hinder you along the way. People and other enemies stalk you outdoors, while you hunt for the secret entrances to underground passageways. Merchants are eager to take your money in exchange for goods, and one hut will provide an entrance to a dungeon that you can roam inside of and look for one of the passes. Two more passes are usually contained in underground passageways, but not always. If you're having trouble locating underground passages, you can purchase a candle which will reveal the hidden entrances for a period of time. If you're truly desperate, you can purchase a pass from a shopkeep at very high prices.

There are five different environments that Goemon must investigate in his efforts to help the poor. While you're not necessarily required to explore all of them, it will certainly help you if you do. 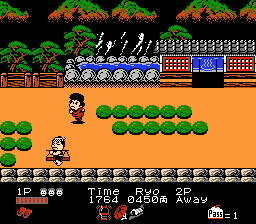 Goemon amidst the townsfolk

This is where a majority of the action will take place. As Goemon passes through each district, the scene will shift from a city, to a forest, to a sandy beach or mountain cliff and beyond. Outdoors and castle hallways are the only environments where Goemon can actually be attacked and killed. Keep his defenses high and his offensive power steady. Items can be collect by jumping over gourds and money can be collected by jumping over purses. Hidden underground entrances must be leaped over in order to make them appear. While a few stages consist of one long stretch of action, many stages are actually composed of several strips of land that are connected by pathways along the top and bottom of the path. 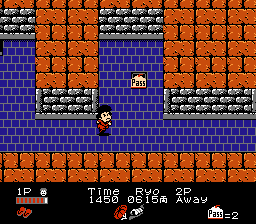 Items and passes can be found underground

Goemon has little to fear and much to gain by exploring the underground passageways. Not only can they provide him with rare items like one of the three stage passes, or a life increasing package, they can typically serve as a shortcut between to distant overground locations in a stage. Finding the location of hidden entrances can be challenging, and made easier by purchasing a candle, but a candle will only last for so long.

The second game limits the number of underground passages that you can find in a stage to just two. And in some cases, there is only one, or even none in a particular stage. Once you have found two underground passages, you've found the most there can ever be, so don't bother looking for any more entrances.

Goemon can venture inside many different buildings to escape the activity of the outdoors for any period of time. There are a variety of shop types and residences, all of which are described in detail below. Be aware that the purpose of the

buttons change when you're indoors. Make sure you know what you're pressing before you accidentally purchase something that you didn't need. 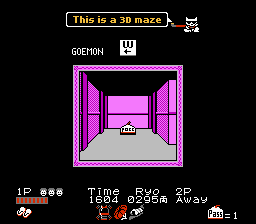 Finding a pass in the dungeon

One particular building in many stages will grant you access to the stage dungeon for an increasing price. You must pay every time you wish to enter the dungeon, even if you've already been in it before. (There is one stage that is an exception, and has two dungeons, both of which can be explored for free.) You are presented with a first person perspective when you are inside of a dungeon. You are always safe and can never be attacked. Inside dungeons, you can find the following items: Coffers worth 100 Koban, one stage Pass, a map to the dungeon floor plan, and possibly an extra life. The map will only show the location of every item, but won't identify what the item is. You can press

to see the map if you have collected it. Two items can help you either locate the dungeon exit, or automatically escape a dungeon if you become lost. 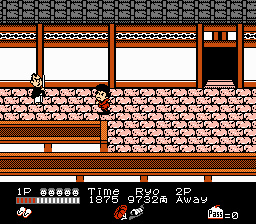 Watch out for danger when roaming through castles.

New to this version of Goemon, you will explore the interior of castles during two stages. Castle hallways are very much like the outdoors. They are patrolled heavily by guards, although you will occasionally encounter women wandering around as well. Castles are like large mazes which you must learn the correct path to get through. Each castle has several floors, and your goal is to figure out how to travel from one floor to the other. Like the outdoors, it is possible to find shops and restaurants that can help you on your journey, but only if you have enough money to spend in them. 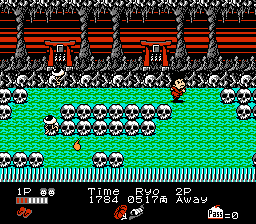 Avoid taking the trip through hell.

Also new to this version of Goemon, you may also be sent on a trip through hell from which you must escape if you wish to continue playing. Certain red scarfed statues in many levels will transport you to hell if they are struck by your weapons. Passage through hell is fairly dangerous and only serves to weaken your health, although you do earn a little money for each enemy that you kill. Once sent there, you must run all the way to the right until you reach the end where you'll find a different statue which you must strike in order to be returned to the overworld. 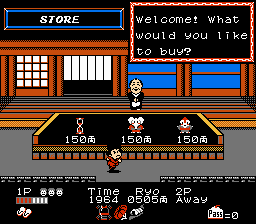 Items are cheap… the first time

to cycle through your purchasing options, and press

to purchase something. You can purchase multiple items while you're there, but if you wish to purchase more than one of the same item, you must leave and return. An item's asking price will increase around 10% after you purchase one the first time. This effect resets when you advance to the next stage, but items increase in price as you travel from one stage to the next. 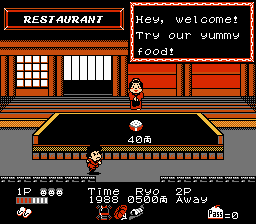 Almost as common as shops, you will find restaurants who wish to serve you various dishes of traditional Japanese cuisine. Like shops, some restaurants sell one dish, while others have three to choose from. In general, the amount of health that a dish will restore is proportional with its price. And like items, repeat purchases of food generally cost 10% more than the first time you try it. 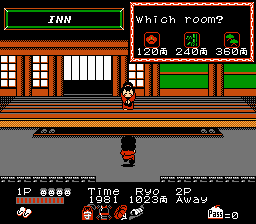 Restore your health by sleeping in safety 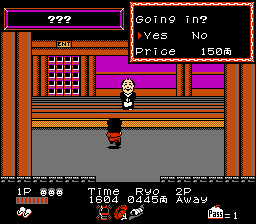 Make sure you have enough money to enter

One building in most of the stages will provide you with the opportunity to enter the stage dungeon. There is a fee associated with entering the dungeon, which you must pay before you are granted entrance. The only exception to this is in Stage 4 where two caves provide you with free access to two different dungeons. 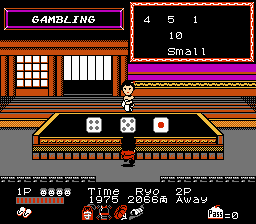 Double your money or lose half

There are two different types of gambling halls. In the more common type, a man with some dice will ask you if you wish to gamble some of your money. He will ask you if you wish to bet that the sum of the three dice will be small (10 or below) or big (11 or above). After you make your selection, he will roll the dice. If the resulting sum matches your guess of small or big, your money will be doubled. However, if you are wrong, your money will be cut in half. Note that the most money you can ever hold at one time is 9999, so the farther you are over 5000 Ryo, the less worthwhile gambling will become.

In the second type of gambling halls, you will simply be charged a fee of 30 Ryo. After that, three numbers are selected, and the dice will be rolled. If the sum of the dice equals one of the three numbers selected, you will win one item associated with the winning number. The numbers and the items are chosen at random, and you have a 20% of winning anything at all. 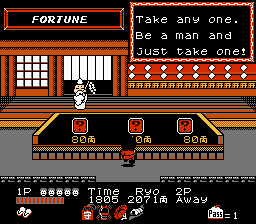 Will you have good fortune or bad?

Fortune tellers are rare in the game. If you find one, he will ask you to choose from among three mystery fortunes for a set price. Depending on what you choose, the fortune could be average luck, bad luck, or possibly great luck. If your luck is average, nothing will happen at all. If you have bad luck, rocks will rain down from the ceiling and you won't be permitted to leave until they stop, so you must run back and forth to avoid them. But if you have great luck, Ryo will rain from the ceiling instead. Then you'll want to run back and forth in an attempt to catch and collect as much of the Ryo as you can. Once you purchase a fortune in a stage, you will not be able to purchase another one until you advance to a new stage. 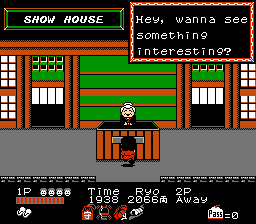 Discover the mystery of the show

When you enter a show house, you will be asked if you want to pay the price of admission. If you say yes, you will be permitted into the show. It will appear that you are simply going in to watch a woman dance, but near the end of the show, something odd will happen. 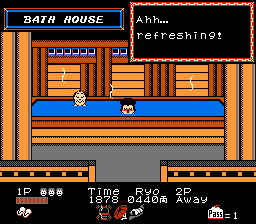 Restore health with a hot bath

Upon entering a bath house, you will be asked if you wish to pay for admittance into one of the baths. The mens bath room is on the left, and the womens bath room is on the right. If you choose the right side, the bath will restore your health, but if you choose the wrong side, you will be attacked and lose health. The choice is fairly obvious for Goemon, but there's something odd about Ebisumaru. 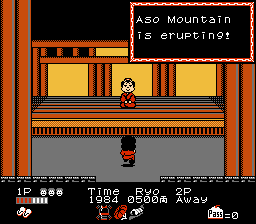 Seek the wisdom of the villagers

Some of the huts that you come across simply contain villagers. They will always have something to say. Whether its valuable information, or just nonsense depends on who you talk to. One thing is for certain; the villagers certainly like Konami games.